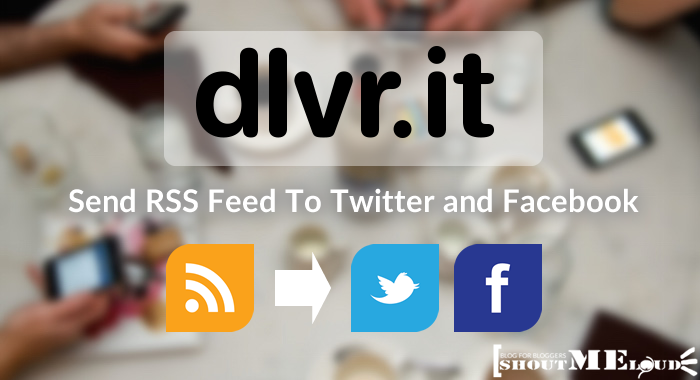 One of the easiest ways to blog smartly is by automated most of daily tasks. Here I’m sharing about a 3rd party app call Dlvr.it that will help you to update RSS feed to Twitter and Facebook automatically.

When I started blogging, I asked myself ” who will read your post? how will people know that you have published something on your blog? ” So few days later, I came to know about ” Promotion .”

In short it is a social media content distribution service the and best part is it’s completely free.

Manually posting on all these sites is a tedious task. Well, many might knew about Twitterfeed or Google’s Feedburner integration with Twitter, which actually lets you send your feeds to twitter when publishing on your blog. but, how about knowing your post to your Facebook or LinkedIn connections simultaneously?

By using Dlvr.it, You can save a lot of time promoting on social media. Depending upon your requirement, you can post RSS feeds to Twitter, to Facebook, and LinkedIn.

Here is a beautiful web app, which lets you send your RSS feeds directly to Twitter, Facebook and also LinkedIn automatically when the post is published on your blog. You can save a lot of time promoting on social media. Remember, too much of promotion will be taken as spam.

So, use any one application and promote your articles.

How to set up Dlvr.it:

Dlvr.it is a simple web tool that delivers your content to the social web automatically. It is fast and easy to set up and effortlessly post content to your social networks. Here is a complete tutorial to set up Dlvr.it and you can start with auto sending RSS feed to Twitter, Fb, and Linkedln.

1. Enter your feed url and sign up Dlvr.it for free

4. The setup is complete. Now post on your social web effortlessly.

Personally, it’s always a good idea to have one centralized place for feed publishing. This will make your work easier and you will be able to manage your feeds and connected social networking site easily. Make sure, you do not configure other ways to automate the updates as this might create duplicate posts and will not be pleasant to show duplicate updates to your followers. In case if you are looking for Dlvr.it alternative to automate the publishing, you can use native app for everything, check out following posts:

Anyways, I would love to know have you used Dlvr.It before? What’s your review on Dlvr.it service and what other services you know which allow publishing updates from feed to Facebook and Twitter simultaneously?