Many people don’t get too many interactions on Twitter. So, they get frustrated and stop promoting their businesses on Twitter. But, let me tell you that Twitter is worth it and you should join it. If you are not using twitter for your blog or business, you are losing a lot of traffic and customers. So, don’t ignore Twitter and follow these tips to get more interactions and followers on Twitter.

It’s not like you are gonna join Twitter and people are gonna visit your profile and click the follow button. You need to follow the interesting and influential people in your niche. This way you would come to know more about them and your industry as they would be posting the latest stuff going on. So, this way you’ll be able to update your blog with the latest things going on. Please don’t use follow and follow back method to get more follower. Because you would never receive quality followers that way.

Don’t just follow others also interact with them. If you are not gonna interact with anyone, no one would know about you, and you will be all alone tweeting and seeing your tweets yourself. So, interact with people whom you follow or like. Reply to their tweets, help them wherever possible. Now, this way they would come to know more and more about you.

If you would reply to their tweets frequently, they’ll be like, “He is a cool person.” So, interact with others, and they’ll interact with you. Maybe they’ll like you so much that they’ll follow you and retweet your tweets. So, if they have 20,000 followers and they are retweeting your stuff. You know, you are gonna get a lot of visitors to your site. And, don’t forget that you can interact with as many people as you want.

You should take advantage of various Twitter tools to keep track of all the engagement. If you are using Twitter on your Mac or on iPhone, the official Twitter app is pretty decent. Tweetdeck is one of my favorite, and if you need more power and control, you should get a free Hootsuite account.

So, if you are adding hashtags to your tweet with your blog’s link. That tweet is gonna be visible to all the people searching for the hashtag you add to your tweet. So, this means that more people would be able to view your tweet and visit your website through the link you gave them in your tweet.

There would be all the people having a conversation on something. So, once you know what the conversation is all about, you can just tweet about a relevant blog post you are having on your blog. You can help all the people who are asking any questions. If they like you they are gonna follow you.

Note by Harsh: You should check out Twchat for Twitter chat directory or even for participating in a Twitter chat conversation.

Read: The Ultimate Guide To Joining or Hosting A Twitter Chat

5. Let Your Current Followers Know, You Are On Twitter

1. Follow all the interesting and influential people in your niche. Please don’t use follow and follow back technique to get more followers. Also, don’t use any bots or hacks.

3. Use hashtags to increase your reach and target more audience on Twitter.

5. Tell all your friends and followers that you are on Twitter and tell them to follow you.

If you are new to Twitter and still lacking engagement and interaction, here are few amazing posts on Twitter which you should read: 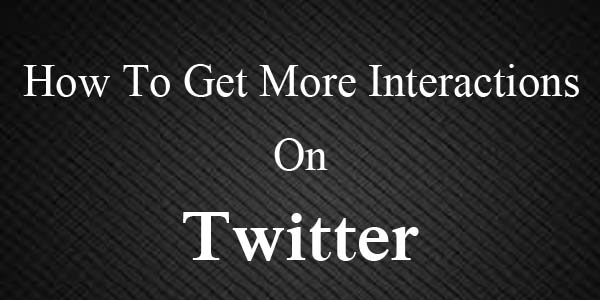 Authored By Chatty Sharma
Chatty Sharma is Growth Hacker at ShoutMeLoud. He likes to play with numbers and test new things to drive more revenue and growth to the company.