This is the time of the month when I share my blog’s earnings report as well as other juicy news related to my blogging journey.

Publishing a monthly income and traffic report is a part of our transparency policy here at ShoutMeLoud.  We share this information for another reason as well.

Note: The above image was created by Shravan from Digihackers. If you have created anything exclusively for ShoutMeLoud or for the Shouters community, you can mail me at [email protected]

Unlike February which was slow in term of activities, March was full of activities and education. Last month was a terrible month for me where WordPress and hosting issues are concerned. I had to spend a great deal of time breaking free from tech hassles rather than focusing on more important issues, and that is always a source of frustration for busy people running a business.

One of the biggest problems I faced last month was a hosting issue. I had been using Cloudways hosting for a good four months, when I began to experience the slow WordPress dashboard issue. Things got out of hand, (I couldn’t even post anything!), and increasing my server size was of no help at all.

I had no choice but to move to another source of hosting, and this time I settled on a managed WordPress hosting company called Kinsta.

What surprised me about this hosting plan is that my monthly expenditure for ShoutMeLoud’s hosting decreased to $157 from $206! That’s a clear savings of about $50 a month, which is significant. I will share a detailed review of Kinsta hosting after trying it for few weeks.

On the 19th of March, Jetpack plugin launched an update, and it broke my site. Since my Android app was dependent on the Jetpack plugin, it too stopped working. It was a difficult and challenging time for me, as I received a lot of emails from ShoutMeLoud Android app users regarding the app not working. The issue is now repaired, and the problem was identified as a plugin conflict.

Last month I transitioned ShoutMeLoud from using the Thesis theme to using the Genesis theme. I have wanted to make this transition for a long time, and I’m glad I finally did it. With this change I also moved all of my SEO settings from Theme to a plugin, and I am now using SEO by Yoast here at ShoutMeLoud.

Now let’s have a look at the detailed traffic & income report from last month. I will also share a few important insights, so pay close attention to the information written below!

Last month’s transition from the Thesis theme to Genesis’s framework was a smooth transition overall, with one glitch: I missed adding codes to show the last updated posts in the search, and Google again indexed my posts with dates back to 2009. Thanks to this error, my traffic went down by 40% for 6 days. I was later able to recover the traffic by fixing the code.  Apart from that traffic dip, overall traffic was consistent for the month.

I have set a goal to reach one million page views per month by the end of this year. Considering my existing traffic stats, the goal is a bit unrealistic, but I remain hopeful that we will reach that target.

ShoutMeLoud’s Android app was down for almost 7 days, but even with that very significant issue, my overall traffic on the Android app increased significantly.

Compared to February’s 8400 screen views, in March the app had more than 15,000 screen views. The number of active users and sessions have grown significantly.

You can see February’s app traffic report here, and compare it with the March report.

In the last week of March, ShoutMeLoud’s Android app got an update, and now the application has enabled comments. I also made a few changes in the UI and backend, which will be announced in a separate post. For now, you can download the app from the Google Play store.

Note: You can now order an app for your blog using ShoutMeLoud’s App development service! Since we are in the pilot stage of this offering, the launch pricing is pretty decent.

Last month I made a significant purchase of Leadpages, which is an important blogging tool for gaining email subscriptions. I created a landing page like this in 5 minutes with this tool. You can check out all the features here.

We are already in the month of April, and I’m pretty excited about the coming months. I have learned over the past few months that it is important to invest in the right tools and the right people. The new ShoutMeLoud design is under construction, and I’m spending about $1,000 for a complete re-design. Hopefully, by the end of the month you will see the new design live!

Before I wrap up, here is a video from our Bangalore ShoutUP Workshop:

This concludes my March 2015 blog report!

I would love to hear about your education and achievements for the past month. 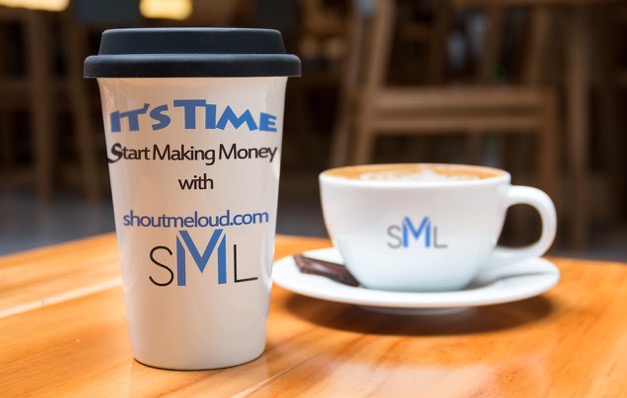