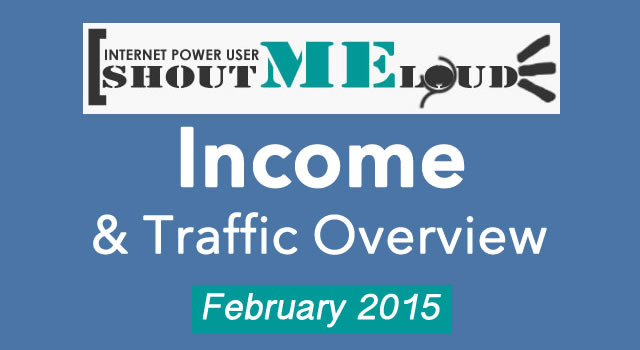 Here we are in the 3rd month of the year, and it is once again time for me to share our income, expense and traffic reports for the last month.

When I compile these reports, it helps me to clarify what is working well and what isn’t. Also, at the conclusion of these reports many Shouters like you offer suggestions of new things to try, and this serves to open up a new vertical for me.  Most importantly, I believe transparency offered by reports such as these helps ShoutMeLoud readers to discover new things that they can work to make their blogs successful and reach their own goals.

ShoutMeLoud’s monthly income report is part of our transparency policy, and you can read this post to understand why I share this valuable information with you and others.

In many ways February was a month like any other, but one unique piece of work that I accomplished was ShoutUp Blogging Workshop#2. This was the last blogging workshop in Delhi for this season.  The next workshop is in Bangalore on March 15th, 2015. You can read about the Bangalore workshop over here. 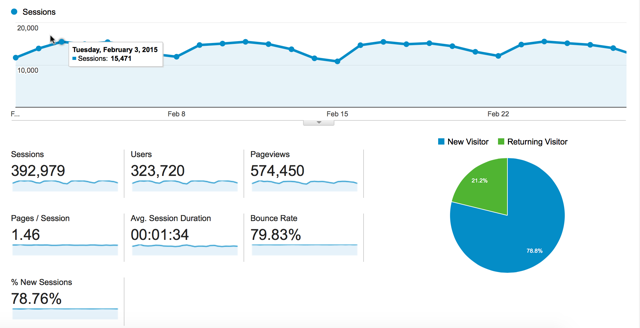 February traffic was consistent in all aspects, and there was no significant movement in any metric of blog traffic. I’m hoping to reach one million page views by the end of this year. It’s a long way to go, but it’s always great to have a goal to work toward!

I am thrilled to see the ShoutMeLoud Android app performing so well! Traffic is increasing every month, and I am rolling out an update this month which will allow you to comment directly from the app. This update will also include the app indexing that Google announced a few weeks back. This will be helpful to those of you who have installed the ShoutMeLoud Android app.

This month the total revenue is about $1,800 less than last month. This is reasonable and understandable as I invested roughly this amount to buy 2 Sennheiser wireless lapel microphones and lights to start shooting videos for ShoutUniversity. I believe the next two years will be big years for video and podcasts.  So, as always, I want to invest ahead of the curve!

Speaking of podcasts, I will be launching the ShoutMeLoud podcast channel soon! For now, you can listen to our Podcast intro below:

Best of ShoutMeLoud from February 2015:

Here is some of the great content we published last month that you will not want to miss:

That’s all for last month’s roundup. Overall, February was a month without any significant change in traffic or income, though I hope to reach that $15,000/month milestone in the coming months!

How was your month of February in terms of traffic and revenue? Let me know via comments.