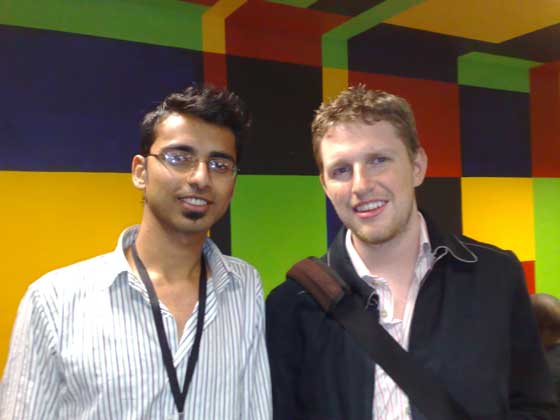 Here are a few somethings from the blogger’s meet:

The meeting starts with the keynote of Priyanka, popularly known as the Twilight Fairy.  The speech by Om Malik is quite magical; he is a true Indian at heart despite living in the USA for the last 18 years. He was so excited to see the great response to blogging in India.

After Om Malik’s speech, Shreyas talked about how to enhance the power of WordPress to create a radio site. How he is intelligently using two databases on a single WP installation was also quite impressive.

The agenda mentioned Abhijeet Mukherjee talking about how to get started after installing WordPress. At first, I thought maybe I don’t need to know much there, but I was wrong.

Abhijeet’s speech delivery was excellent, and the way he talked about the necessary steps to take after installing WordPress will help new users for sure. If you don’t know about Jeet yet, you should have a look at his profile.

Then comes the man who we owe the most to, for the valuable and priceless gift he has given to us in the form of WordPress.

Matt Mullenweg, a man whose modesty will make you think if he is the same guy who changed the face of blogging.

Matt spoke about how he made WordPress a reality. He developed WordPress for his need, and never realized that it would change his life in such fashion and in such a short span of time. The best thing about Matt, however, is his modesty.

Next session was about SEO.

There are more articles on SEO on ShoutMeLoud, and if you don’t want to miss any of them, you can subscribe to ShoutMeLoud feeds.

I would instead write a detailed article on Amit’s Adsense optimization guide. Meanwhile, you can refer to my previous articles on:

There was a small quiz, which was followed by an open house discussion with Om Malik and Matt.

The open session was the end of the first day of WordCamp. I feel lucky to have been part of such a historical event. This was the first WordCamp ever organized in India.

If you have missed the WordCamp, I would suggest keeping track of Twitter because we were twittering about every little update. You can catch me live on Twitter @ShoutMeLoud.

If you were a part of this event, feel free to share your experience with us.