Trying to decide between SiteGround vs Bluehost to host your website?

SiteGround and Bluehost are two of the most popular web hosts for any type of website, and both also offer lots of useful features for WordPress users. Because you’ll see so many people recommending both hosts, it can be hard to know which one is right for you.

In this post, I’m going to help you decide between Bluehost vs SiteGround. This isn’t about picking a single “winner”. Instead, I’m going to highlight the key differences and make some recommendations so that you can pick the option that best fits your needs and budget.

I’ll start by comparing them in three keys areas:

In general, when it comes to pricing and resources, Bluehost is more affordable than SiteGround. This is true for both the promotional prices (what you pay for your first billing cycle) and the regular prices (what you’ll pay when you need to renew).

And here are SiteGround’s:

Beyond looking at the pricing charts, there are a few other important things to consider here:

Another thing that makes Bluehost cheaper are the resources that you get with your plan. With the exception of the cheapest Basic plan, Bluehost gives you:

SiteGround does give you unlimited websites (excluding the StartUp plan) and unmetered bandwidth. However, they impose strict storage limits. For example, even the expensive GoGeek plan only gets 40 GB, while Bluehost still gives you 50 GB on the cheap Basic plan (and unlimited storage on all the others).

Additionally, while SiteGround does offer unmetered bandwidth, they do advertise a suggested visit limit. This limit isn’t a hard cap – it’s just an estimate of how many visitors you can have before SiteGround’s other limits (like CPU seconds) kick in. If you want to see the technical limitations of SiteGround’s plans, you can:

I also wrote a post explaining the limitations of SiteGround shared hosting.

Note that, while Bluehost doesn’t meter any of your resources, they will still enforce fair use policies. So if they feel that you’re abusing the limits, they might still restrict your account:

Because both Bluehost and SiteGround’s promotional prices offer such a big discount, it’s usually a good idea to pay for as many years as possible upfront. For example, if you pay for three years upfront, you can lock in the cheap prices for all three years.

You used to be able to do this at both Bluehost and SiteGround. However, as of 2020, SiteGround only gives you the full promotional discount on your first year. If you try to pay for two or three years upfront, you will still get a small discount, but not the full advertised promotional price.

For example, let’s say you want the SiteGround StartUp plan, which is advertised as having a promotional price of $6.99 per month and a regular price of $14.99 per month. If you sign up for a year, you’ll pay that $6.99. However, the prices for two and three-year plans are slightly higher:

So while you still get a discount, the deal isn’t quite as good.

With Bluehost, it works in the opposite direction. The longer the period you sign up for, the bigger the discount you’ll get.

For example, let’s say you want the Bluehost Plus plan, which is advertised as having a promotional price of $5.45 per month and a regular price of $10.99 per month. If you want to get that full promotional price, you’ll need to pay for three years upfront. If you pay for a shorter period, the monthly price will be higher:

If you want to save some money, you can use a third-party registrar like Namecheap or Google Domains, which charge more like $10-$12 for a .com domain name.

While Bluehost wins in terms of the pricing and resources, SiteGround is ahead when it comes to performance.

One of the things that explain why SiteGround is more expensive is that SiteGround has been investing a lot of money into its infrastructure, which means better performance for SiteGround customers.

For example, SiteGround recently moved all of its hosting plans, even the shared ones, to Google Cloud hosting, which lets you benefit from Google’s network.

SiteGround also uses a blend of Apache (as the webserver) and Nginx (as a reverse proxy), which lets them offer server-level page caching (but only on the GrowBig and GoGeek plans). Server-level caching not only eliminates the need for a separate caching plugin, but it also performs a little better than caching plugins because your server can completely skip WordPress when loading content from the cache.

I know that’s a little technical, but the only thing you really need to understand is that this makes your site load a lot faster.

SG Optimizer is every bit as good as the WP-Rocket plugin and SiteGround customers get it for free.

Finally, on the GoGeek plan, SiteGround recently added its own Ultrafast PHP setup, which can further boost performance.

Bluehost doesn’t completely ignore performance – you do get some features like built-in caching. But in general, SiteGround’s hosting architecture is more optimized than Bluehost’s.

In my performance comparison test, SiteGround is definitely a winner. However, the price difference between two does not really justify this win, and I was expecting a much better result from SiteGround.

For this test, I have used Genesis theme + Cloudflare setup on a live site with same set of plugins. Let’s look at the results from the different tests:

Even in the site response time, and load time SiteGround was a clear winner.

Another important part of WordPress performance is data center locations. The physical distance between your host’s datacenter and your visitors will play a big role in your site’s page load times. You can reduce this impact by using a content delivery network (CDN). However, you still want to always choose a data center that’s as close as possible to your target audience.

Another aspect that doesn’t get as much focus is backend dashboard load times. If you’re further away from your site’s datacenter, your WordPress dashboard will also load slower when you’re working on your site, which can be frustrating.

When you sign up, you can choose the datacenter that works best for you.

While Bluehost does have multiple datacenters, they don’t let you choose. They also make it very hard to even find out which data centers they offer because they don’t list them on their website.

In total, Bluehost has data centers in the following locations:

But again, make sure you sign up via the local Bluehost website for your region (or the region that you want to target) because you cannot choose your own datacenter like you can with SiteGround.

Bluehost and SiteGround are both very user-friendly hosts. In this section, I’ll go through their hosting dashboards and some key features.

Both SiteGround and Bluehost offer custom hosting dashboards to make it easier to manage your site.

Bluehost, on the other hand, uses a hybrid combination of its own custom dashboard, while still giving you access to cPanel if you want it. This combination is nice to have – beginners can perform most important actions from Bluehost’s custom dashboards, while more advanced users can still access the full cPanel dashboard if needed.

Both hosts also give you convenient features to help you manage your site.

With either host, you’ll get:

One important area where SiteGround wins out is backups. On all plans, SiteGround automatically backs up your site every day and stores 30 days of backups. Bluehost, however, only offers automatic backups on the most expensive Choice Plus plan.

However, keep in mind that SiteGround stores the backups on your site’s server, so you’ll want to periodically download them to your local computer to eliminate a single point of failure.

SiteGround vs Bluehost: Which Should You Use?

SiteGround and Bluehost are both popular hosts for a reason. That is, they each have their strengths and weaknesses and there’s not one “better” host for every single person.

In general, Bluehost is good for a beginner looking to get started for cheap. Bluehost’s pricing is about as cheap as possible, and you also get a free domain name for your first year which brings the cost down even further.

Additionally, Bluehost does a great job of making it simple and easy to launch a site. While SiteGround is also pretty easy to use, Bluehost’s onboarding wizard is one of the best and makes it really easy for a newbie to get up and running.

On the other hand, SiteGround is good for people who want to level up their hosting to get better performance. With its new prices, SiteGround is definitely more expensive than Bluehost – there’s no way to avoid that.

However, the upside is that you get better resources and useful tools for WordPress performance. For example, SiteGround uses Google Cloud infrastructure on all its plans now. On the GrowBig and GoGeek plans, they even implement server-level caching which offers excellent performance and means you don’t need a caching plugin.

SiteGround customers also get access to the free SG Optimizer plugin, which can rival premium performance plugins like WP Rocket in its feature set.

However, in order to get that improved performance, you’re going to pay a little more and you’ll also have to deal with limited resources. For example, there’s no more unlimited storage and, while SiteGround doesn’t put a hard-limit on traffic, their plans do have “suggested” visit counts.

When you’re just getting started, you probably don’t need that extra performance, which is why Bluehost makes a good option. But once your site starts growing, it can make sense to invest in a host that offers better performance, like SiteGround.

For more detail, we also have full reviews of both providers:

Do you have any questions about Bluehost vs SiteGround and which host is right for your needs? Leave a comment below! 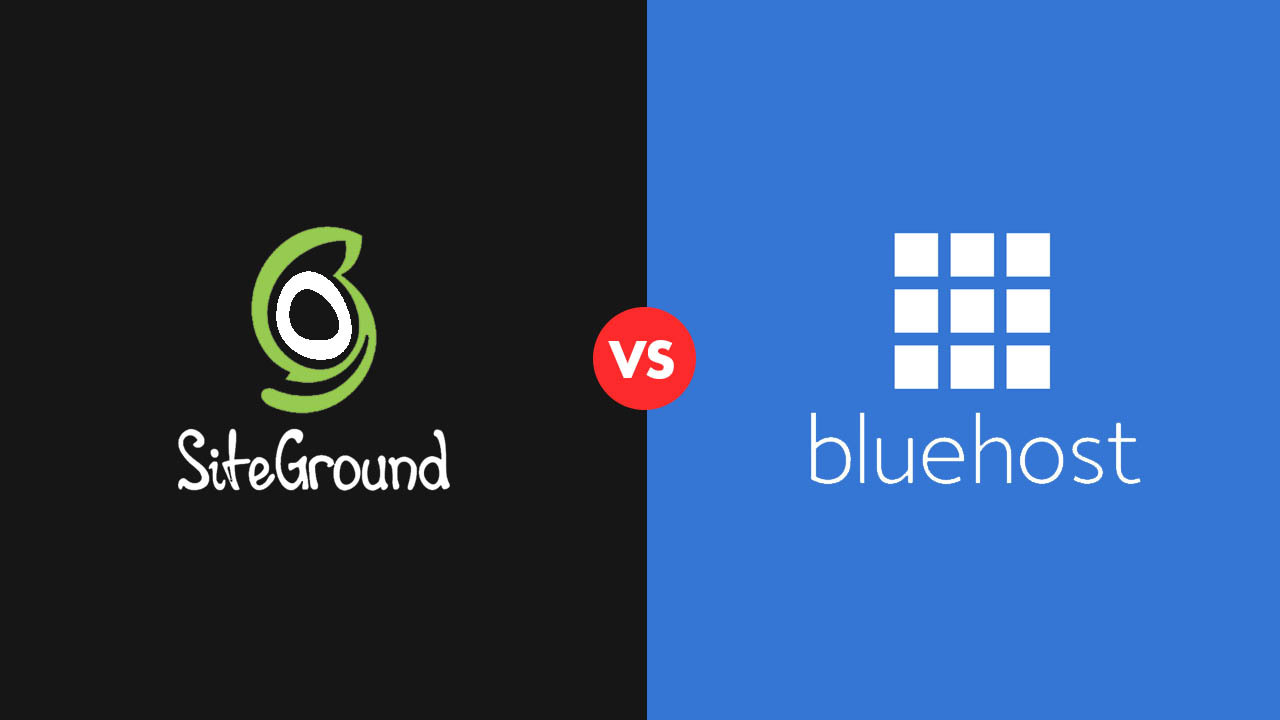 9 thoughts on “SiteGround vs Bluehost: Which Host Is Better? How to Pick (Comparison)”