So, here we come to the end of this series of Growth Hacking articles at ShoutMeLoud. A lot has already been discussed about what exactly Growth hacking is and the tools for making the most of this technique. If you have somehow managed to miss through these articles, I have listed down growth hacking resource which every blogger and entrepreneur should read:

This brings us to the last and probably the most interesting part of this series, as I believe that when examples go hand-in-hand, things get engraved in our minds.

For late comers; Growth hacking is the ability to quickly scale products and companies without the use of traditional advertising and marketing techniques. Now, lets look into some of the practical implementation of growth hacking techniques by many popular companies.

Metro.co.uk‘s Head of Development Dave Jensen shared this chart of the growth of their monthly unique visitors:

This involved the following Growth Hacking techniques applied by Metro.co.uk for the increased reader base. [Note: Consider some of these techniques be outdated following their tactics listed from the January of 2012, the web has evolved a lot since.]

4. Creating compelling and user engaging quizzes, that increased the user activity on the site, taking to over 1M new unique monthly visitors in a little time.

When was the time that you searched your name in Google search engine and found loads of pages that mention ‘you’? Not probably before the advent of LinkedIn into the social game, unless you were a topshot back then. Welcome LinkedIn and the whole game changed. The network went from a 2 Million users to 200 Million strong within a matter of time.

Before the introduction of LinkedIn, a search on Google by your name would mean to dig through loads of results to find the real you. LinkedIn allowed users to create profile and company pages and made them indexed in the Google Search Engine., so everytime you search by your name, it would be in the top results, provided you have an account there.

The second largest website after Google. How did they manage to grow from just a network to share videos to the leader in online videos? Simple, no-nonsense re-design and growth hacking techniques that brought them to more than Billion unique views per month.

Remember this inevitable box beneath every video that you watch on YouTube? This was one of the growth hacking techniques of YouTube to increase user engagement with better placed and intuituve share and embed buttons.

Here’s a breakdown of the Growth Hacking techniques of YouTube:

Mint.com became the #1 blog in personal finance within a short matter of time. Their main goal was to build a platform that was content-rich and were constantly interviewing young professionals who were usually left neglected. They made the most with infographics and articles, and community sharing services like Digg and Reddit came for the best of them.

Here are a few growth hacking takeways from the rise of Mint.com:

This was one of the most intriguing Growth Hacking strategies applied by Hotmail during their launch. However funny it may seem, this did work out wonders during then. Hotmail was one of the industry giants in the field of online Emails.

So, the investor of Hotmail – Timothy Draper spoke out this idea to the co-founders -Sabeer Bhatia and Jack Smith, while deciding on the promotion of their service and how to get users on board. After a discussion about Billboards and traditional advertising, the investor came out with something that sent them off-to-the-moon in the months to follow.

Their investor suggested putting ‘PS I love you. Get your free E-mail at Hotmail‘ sign at the end of every Email sent through them. This caused a stir and Hotmail started averaging 3000 new sign-ups a day in the beginning. It went on to amass a staggering Million users in 6 months and five weeks after that were at the 2 Million mark.

At the time of its sale to Microsoft, Hotmail had 12 Million active users, considering there were only 70 Million internet users back then.

PayPal is one of the online payments model that relied solely on Growth Hacking techniques. When PayPal set out to become a provider of online payments system, eBay was then an already established player in online goods sales and buying.

Facebook’s growth hacking techniques does not involve one or two but many. The company underwent loads of strategic experimentation’s since its inception and still follows to date. Facebook, initially fell prey to its unrealistic expectations of getting 200 Million users in 12 Months, but thanks to their Growth hacking techniques, they managed to achieve their goal.

Facebook gave a way embed-able badges and profile snippets to their users to show up on their websites. This drove in many new enthusiastic users and word of mouth caught later on. Although a bit secretive, Facebook was rumored to capture service providers to gather users Email addresses. Another biggest impact Facebook had on other users was by bringing in influential people to join the network, by means of creative advertising campaigns.

Quora used the form of growth engineering techniques that found them a leading question and answers place in a short time of span. The engineers and Growth hackers at Quora worked relentlessly to make the product as appealing as possible.

Once Quora was launched, it got notable people in tech like Robert Scoble and Shervin Pishevar and MG Siegler to join on board and engage in the discussions at Quora. The quality of questions were monitored by Quora and that kept things interesting. Topics were added and basically the promotion by these influential people over Twitter caused a traffic surge of Quora in January 2011. Here are some of the best articles on Quora from ShoutMeLoud archive:

Mailbox app was all the rage during its initial launch in the early 2013. The mailbox app provided a unique Email management app that made a simple unified inbox. Mailbox created an intuitive waiting list on its app and that alone led to more than a Quarter Million users adding themselves to their waiting list for the app. The app’s compelling launch video caused a greater impact and more people were added to their waiting list.

Pinterest also came as a surprise to many of the people over how its instant success was achieved. The trick was making the most of simple-yet-effective growth hacking techniques. Here’s a few ways Pinterest achieved their tremendous growth:

So, here we come to the end of this series about Growth Hacking. Well I’m sure you mud have thought of implementing some of the improvised version of above technique for your own blog or start-up. Do remember, all the growth hacking techniques mentioned above were unique, and it doesn’t matter how crazy your own idea seems, but by being remarkable you can be another one making into the list.

If you have implemented any growth hacking technique in your business which worked and you want to share, do comment and let us know. If your idea is remarkable, I will feature it here at ShoutMeLoud.

How did you find this rather new concept of Growth Hacking? Shout out your thoughts about this new buzzword below! 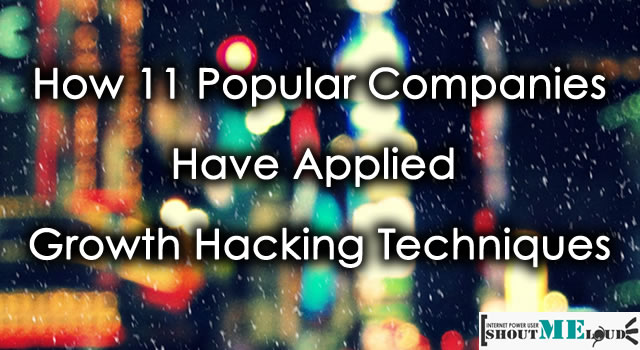