Pinterest is one of those social networking sites which created a buzz in a short span of time.

If you never heard of it and thinking “what is Pinterest“, it’s another social networking site but created with a very different approach.

If you are a Blogger or Internet marketer, and have not joined Pinterest, its high time you should join this image-based social networking site and explore the world of Pinning before it’s too late.

That’s when Facebook integrated it with the Timeline of the users. Since then Pinterest, a social photo sharing site, has been a lot more active is in fact generating around 10 million unique views each month! A quite achievement, right?

While the site is on the stages of its development, most of the bloggers out there are taking the steps to take their business further up the profit ladder.

While Facebook and Twitter have proved to be good sources of promoting your blogs, Pinterest is also one. You can’t say no to it once you get to know about the site’s popularity and how it is benefiting the people.

Here I’m sharing, 8 Pinterest marketing tips that will help you to take your blog to the top in the niche with the help of Pinterest.

Alright, I’m sure you must have visited Pinterest once and in case you have missed out, go to Pinterest.com and check out the elegance look of the site.

People and facts say that Pinterest is mainly meant for women and not for men. Well, men are not prohibited to enter it. The case is that women seem to be engrossed with it more than the men do.

The case is that women seem to be engrossed with it more than the men do. But, I on the other hand, think the other way round. Pinterest can serve as a good place to market blogs for men too.

Simply because you are a man, it doesn’t mean that you have to avoid Pinterest. If you are not yet on Pinterest, get an invite soon from someone and join the site! You can drop in a comment here with your email id, and we will mail you the invite.

The boards are visible to everyone by default. Boards also come with the capability of multi-author management. If you are running a business with another person as a partner, you can create one board with the company’s name and use the same board for “Pinning” content, that’s both you and that person can “Pin” to the same board.

Also, here is good advice for you.

One of the top reasons why Pinterest has been growing insanely bigger day by day is the social integration with Facebook and Twitter. If you “Pin” something to your boards, it will automatically get posted in your Facebook wall and Twitter handle by default.

You can disable the options too. But, integrating it with other accounts will prove to be a good source for generating traffic and create a better presence on Pinterest, right?

Just like I said in the first point, creating a presence is what sets a blog’s way to the top in the niche. If you want to get the best for your blog, you ought to work hard for that and try the best to get the best.

4. “Pin It” button on Websites or Blogs

Talking about Pinterest marketing, the main goal is to make people land on your blog, sales page or landing page from Pinterest. Promoting your blog on Pinterest doesn’t mean that you alone ought to “Pin” content from your blog. Your visitors too can play a role in promoting your blog. You can place a “Pin It” button on the site, giving the readers an option to “Pin” content from your blog to their boards.

You can get the “Pin It” button for your blog, officially from Pinterest here : Pinterest Goodies. Also, for faster pinning, I would suggest adding Pinterest bookmarklet.

Well, I am not denying the fact that I mentioned in the first line of this post. Pinterest is indeed getting noticed by many people out there in this big, giant internet. But there are also a lot more people who don’t even have a knack of what Pinterest is or what “Pinning” means. You can help them understand, right?

If you got a blog about technology or social media, you can blog about Pinterest. You might wonder how that helps you to promote your blog on the internet.

When Pinterest gets popular, many people join it. Your friends do. And in turn, you can make a better circle of audience on Pinterest too who will love to dig into your boards for awesome content and voila. There goes the traffic to your blog too.

With that in mind, let us spread words about Pinterest far and wide and in the near future, let us witness a better circle of audience for our content.  Don’t forget to join ShoutMeLoud on Pinterest.

It’s not only you, as a blogger, on Pinterest. There are lots more blog owners on Pinterest, considering the fact that Pinterest is serving as a good referral for traffic. just like you follow people on Twitter or friend people on Facebook, you can start a relationship with other bloggers on the Pinterest site and get to know about each other. If you both belong to the same niche, then the competition might seem tough, but the fact is that you will notice yourselves working together as a team in the meantime.

Replace ShoutMeLoud.com with blog you are trying to find.

It’s not necessary that you will end up finding blog owner, but in this way you can find people who are interested in content which you like. Similarly, you can use it to find competitors fan and by commenting and repinning, you can create better connection with them. Now, don’t judge my evil intention with the last tip. 🙂

With this in mind, it is better to use creative images in your blog posts and “Pin” them to your boards so that people might get a double look at the image and it will in turn tempt to click on the image or stare at it. Images with something new in addition prove to be better than the same old image.

If you are blogging about Pinterest, you can use a board pin as an image in the post rather than using the same, old, familiar Pinterest logo. People on Pinterest love to see new content each day. Not the same old images that prove to be pretty lame.

You can use tools like Picmonkey, Canva, Fotor to create pinnacle images.

That’s just doubling the audience of a particular tweet. That’s the same in Pinterest too. If you come across a stunning photo on Pinterest and if you want to share that with your followers too on Pinterest, you can easily do so by hitting the “Repin” button and voila! The image will automatically get “Pinned” to your board and your followers too can have a dig at the photo. But the thing is that the ‘Repinned’ photo will sport the original “Pinner’s” name. Create a free account on

The image will automatically get “Pinned” to your board and your followers too can have a dig at the photo. But the thing is that the ‘Repinned’ photo will sport the original “Pinner’s” name.

And now, you might wonder how that will prove to be helpful to you. That’s where the topic comes. When you “Repin” someone’s content and if it proves to be a great one, people might get a look at your recent “Pins” each day and the other and may also reach out to you and follow your “Pins”. Thus, you can promote your blog’s “Pins” and get a better place on Pinterest.

And finally, to put an end to this post, don’t just take a look at these Pinterest tips and leave the place. You better start implementing them soon and get a better place for your blog on that respective niche.

Do you have another awesome tip for using Pinterest and integrate with your blog? Do share it with us.

Do check out these awesome 11 Pinterest tools for marketers. 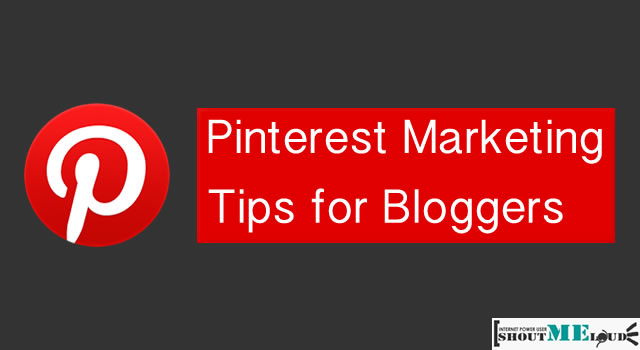 Authored By Arun Sathiya
I'm Arun Sathiya, a 16 year old kid and a passionate blogger from Madurai, India. I blog here at Axleration. As a Blogger, I love to share all the information I know about computer and internet stuff with you and also tips and tricks related to blogging. Follow me on Twitter @ArunSathiya1995