With two months already gone by in 2018, it’s a good time to reflect on our yearly goals and analyze where we stand. Newcomers, welcome to ShoutMeLoud’s Income and Traffic Report.

This is part of our transparent work culture where I share monthly performance reports, and you will also learn about certain things that worked in our favour over the past month(s) and some that did not. You will also find information on the newer things that we are looking to incorporate on ShoutMeLoud.

It’s a good time to read this article to understand more reasons on why I publish such monthly reports. On this page, you will find the links to all earlier published income reports.

Alright, before we move ahead, I would like to share some of the things happened to ShoutMeLoud and me since our last transparency report.

On 1st December 2017, we celebrated our 9th year of existence. This year, we celebrated our anniversary in style. We revamped the look and experience of ShoutMeLoud.com and also unveiled the new brand identity. It was a much needed revamp and something the ShoutMeLoud family welcomed with open arms. We also ran a month-long giveaway where many world-class companies participated to let our readers enjoy some of the best tools in the industry.

You can read about ShoutMeLoud’s 9th anniversary here: 9 Years of Blogging – Evolution of The Biggest Blogging Community

This still gives me goosebumps! Who would have imagined that one day someone will permanently ink the ShoutMeLoud tattoo on their skin! Sharat who has been part of ShoutMeLoud for past four years recently got his first permanent tattoo, that of the ShoutMeLoud logo. Sharat’s belief in ShoutMeLoud is mesmerizing and just witnessing that in his work and ethics makes me proud. Here are the pictures of Sharat with the ShoutMeLoud Tattoo: 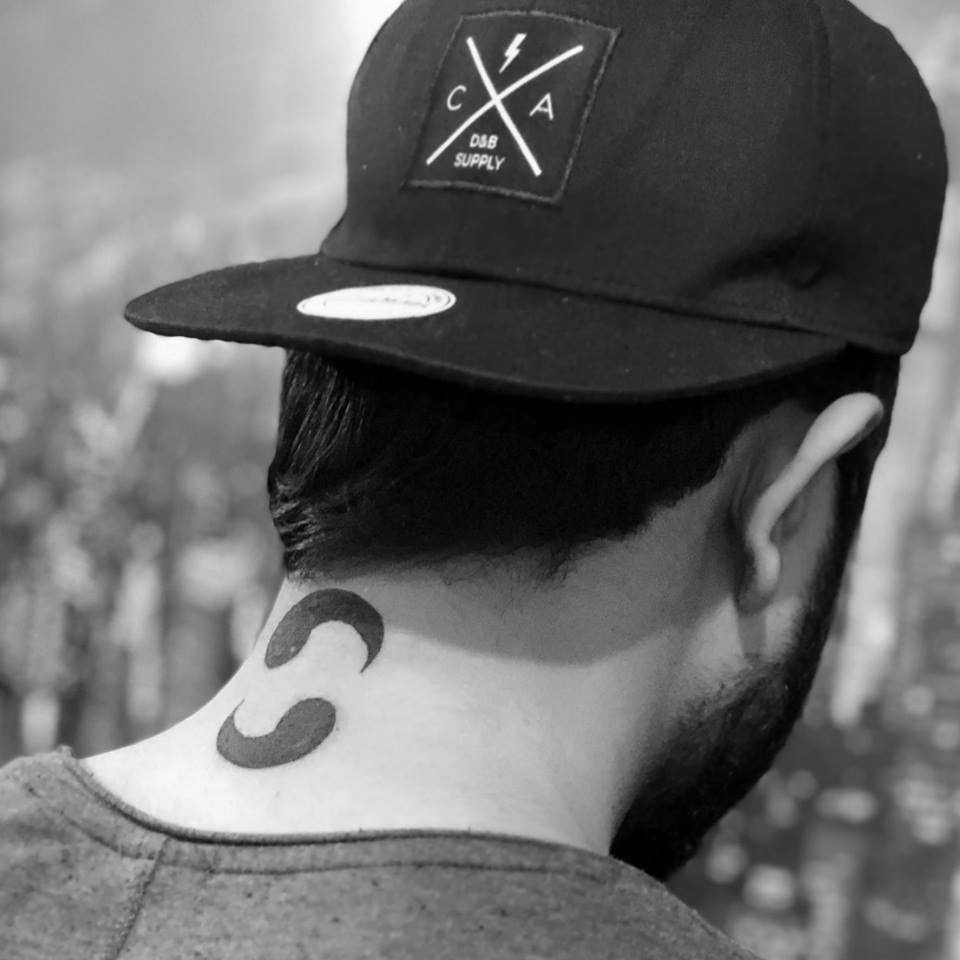 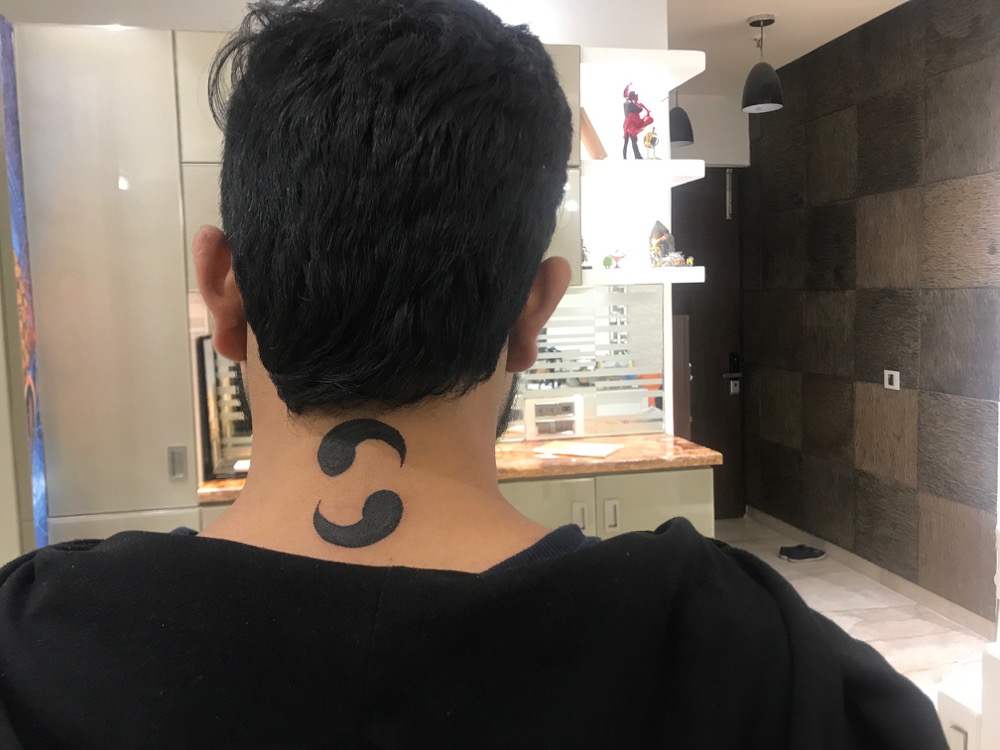 The trip to Alien land – Antarctica:

I went to Argentina to start my expedition to Antarctica in December. I had wanted to cover this white island for years and had finally managed to plan the trip. It was only a ten-day expedition but it is something that I consider as a milestone in my life. 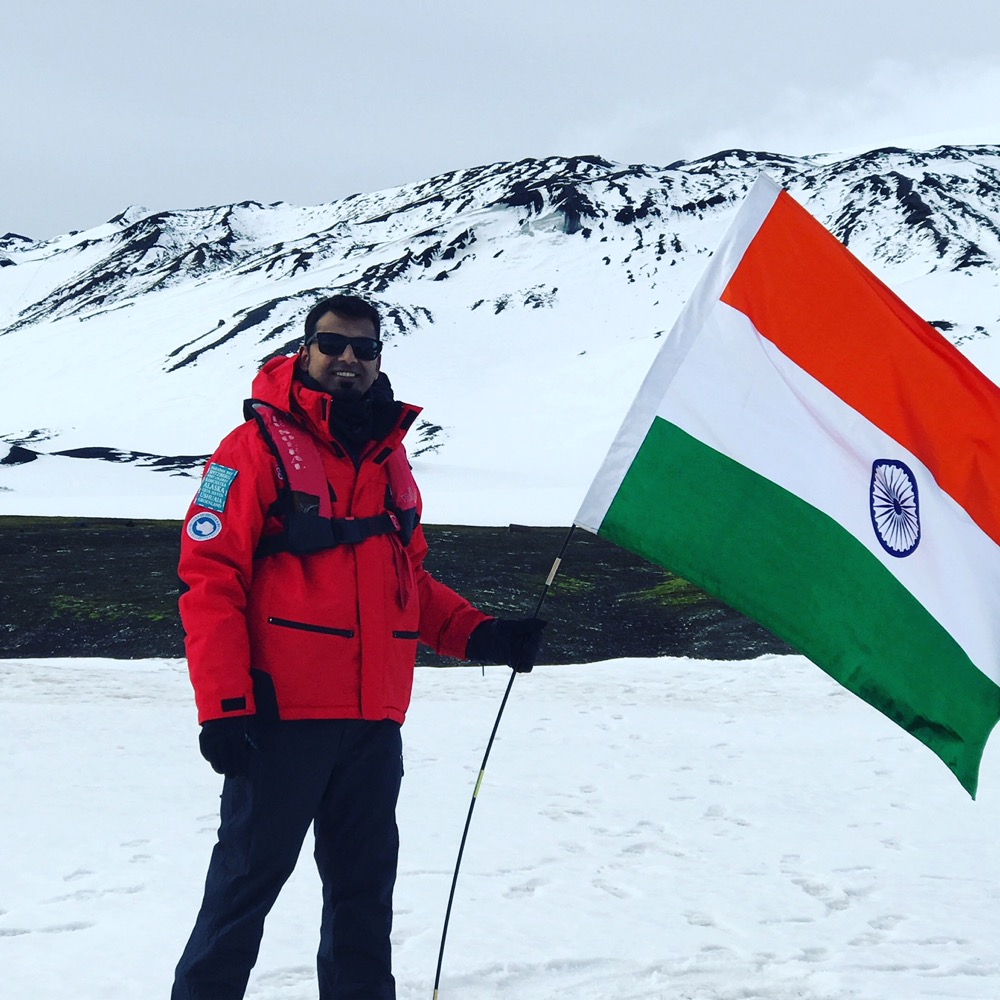 It was a fascinating place to say the least and, as rightly mentioned by someone, an Alien land. It was the first time in my life that I spotted a whale along with seals, penguins and many new species of birds. It was truly an enchanting moment for my family and me. Even though no photographs can do justice to the tranquility of the place, here are some pictures from the trip on my Facebook page here. 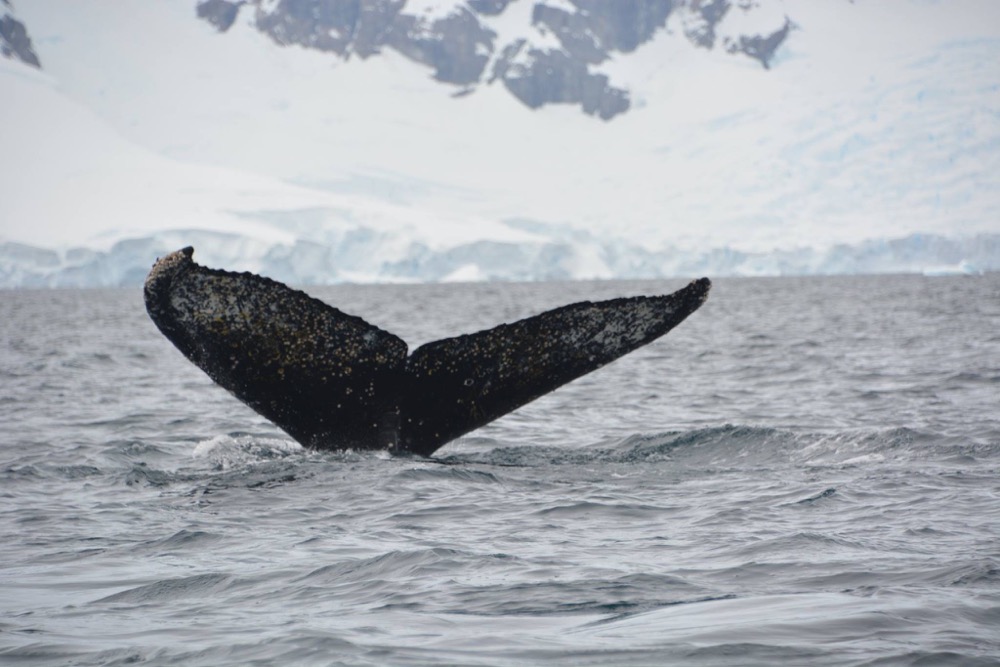 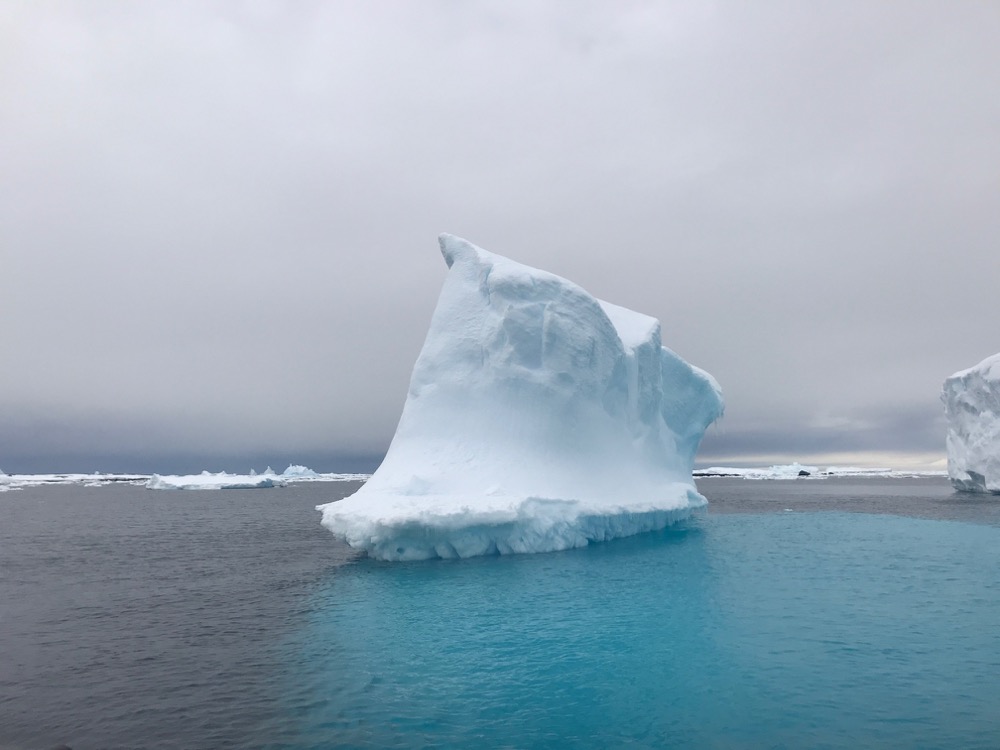 Upgraded my car after seven years

It was in 2010 that I purchased my first car, a Swift diesel (thanks to blogging). I have always been a big fan of road trips, and after seven years of driving Swift in and around the country, I realized it was time to sell the Swift for a bigger, better car for long trips.

One major highlight of this process was my experience of selling Swift. I didn’t want to have two cars as that would be a waste and against my idea of minimalism. I knew I had to sell it to one of the used car stores or find a buyer on OLX or something similar.

However, I thought of getting an idea and went to Cars24, a company that deals in used cars. Within 4 hours, I got the quote, sold my car and received the money in my account – swift as the car! I couldn’t believe how smooth the process was at first, but as I came to terms with it, I was jumping with joy as this startup has made my life so much easier. What’s more surprising is that not a lot of people are aware of Cars24 which is something I believe every car owner should know.

They definitely deserve a dedicated post from all the automotive bloggers as this kind of startup is going to revolutionize the life of end users like us.

For the next two months, I was without a car, and I was managing well. I started testing new cars in September, and the first one I tried was a Jaguar, followed by the BMW and Mercedes. I was about to opt for Mercedes GLC, but somehow I knew was there was something better waiting. Finally, in January 2018, I tested new Volvo XC60, an absolute beast, and I knew just then that it was going to be my companion for years to come.

Within two weeks, I got my new car, and I’m delighted to share the moment of joy with you.

A system or a process is vital for anything to grow. Be it your personal or professional life. With the growth of the ShoutDreams blog network, I have started working with more freelancers and hiring new full-time members as I realized it couldn’t work without having a system in place.

Having a system helps you set realistic expectations for everyone. It provides data to help you make a better decision and overall happiness index rises. A good combination of process and creativity is the key to grow your blog at a faster pace.

Here are a few things that I started doing which are helping me as an individual, and us as ShoutDreams employees to grow the right way.

I have a lot to share around this, but let’s keep it for some other day. For now, let’s look at the traffic and earning report for ShoutMeLoud.

We moved ShoutMeLoud to the new design on 1st December 2017 and ever since the design change, our traffic has dropped by 40%. It was due to some important SEO changes that we were not able to migrate from old theme to new one.

It was in January that I started working on ShoutMeLoud’s SEO again which has helped the traffic somewhat. Currently, we have about 1 million page views a month and I’m hoping to touch 1.5 million by Q2 of 2018.

Here is the report from Google analytics: 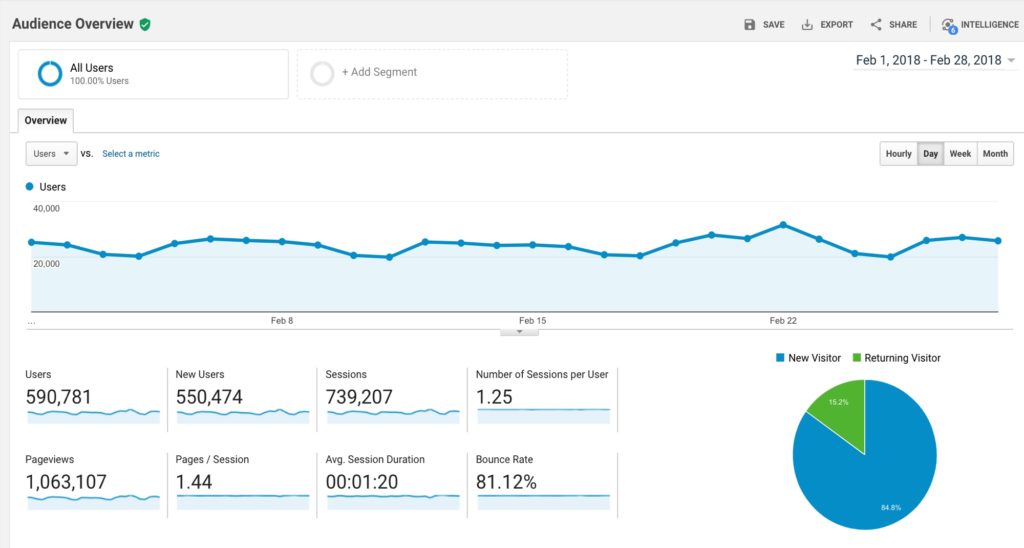 Of the 1 million, 82% traffic is from search engine while the remaining 10.93% is direct. What really baffled me is the social media traffic which is a meager 1%. Social traffic is something I have been focusing on since the last quarter of 2017, but seems like we need a new strategy.

Compared to last year, ShoutMeLoud is very active on Social media platform such as Instagram, Facebook and Twitter which is definitely great for branding but for traffic, it’s hasn’t been yet. Another reason could be the lack of proper tracking and something needs to be done about it. Once I have figured out the solution, I will share it with you.

Its been years since I started the ShoutMeLoud Forum and the only goal was for it to become a common place for all bloggers and marketers to interact with each other. In the initial days, when I had ample time, I used to answer questions from users all day. It didn’t matter if the questions were basics or advanced, I was just answering them.
With time, the community grew to hundreds and thousands of active members and I realized I couldn’t give the time it required. I was already engaged with ShoutMeLoud blog, social media and other projects.  The first thought that I had around that time was: Sunset this forum and focus solely on the blog.
ShoutMeLoud forum cost me more than $100/month and we were not monetizing it with ads.

Nonetheless, forum demanded a considerable amount of time. However, more than me, the forum was helpful for those young guns sitting at someplace where all they have is internet and blog without the feeling of friends and a community. I knew how great it feels to have someone answer your queries and being able to interact with like-minded people. The good part was that the community was being run by moderators. Last month we promoted 3 most active and loved members to the moderator level.

Here are the top members of ShoutMeLoud forum. 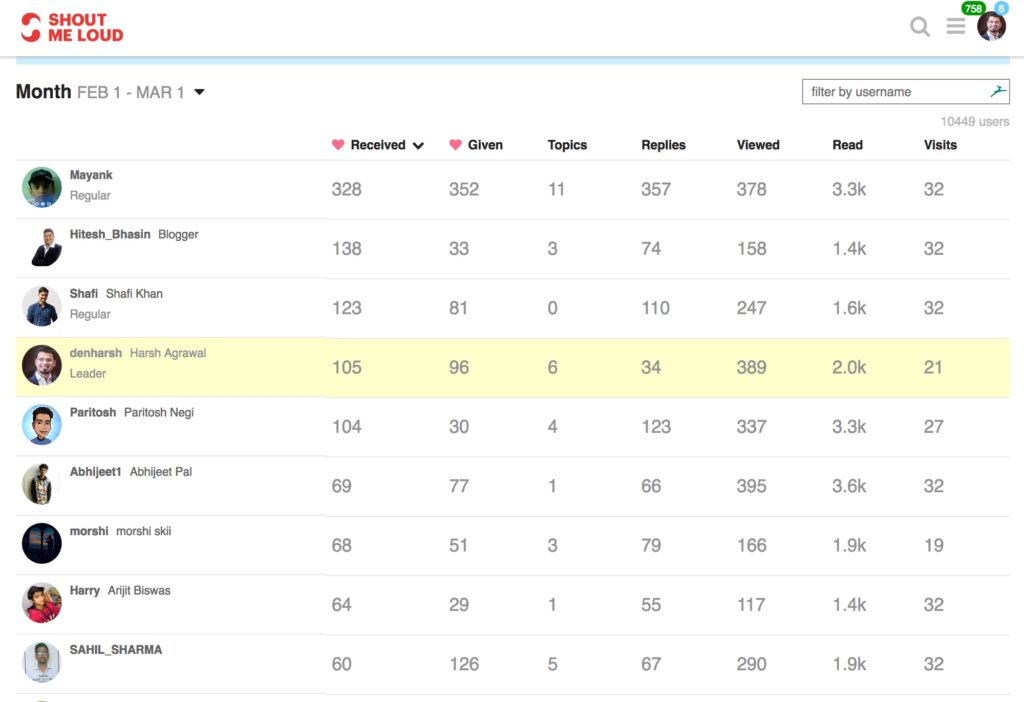 A blog’s traffic is directly proportional to income and this could be easily validated with the help of this report. Since our traffic is down roughly 28% since the last counting, so is our revenue. However, this is not the first time it’s happening. Such dips in traffic and revenue only give us more reasons to roll up our sleeves and get to work.

I usually pay in advance for services such as Kinsta hosting, Convertkit, and a few others as they offer the discount on annual payment. Moreover, I find it better to pay for few of the stuff in advance as it decreased the monthly liability.

There are few more things I wanted to share, but let’s leave something for future articles. For now, it’s your turn. Let me know how February was for you in terms of revenue and traffic and also the new stuff you tried or have plans to.

If you find my transparency report useful and inspiring, do share it with other bloggers on Facebook Messenger and Whatsapp. You can also join ShoutMeLoud on the following networks: