Should you buy hosting from Bluehost India Or Bluehost.com.?

Bluehost India is the latest addition from EIG group to offer a localized hosting experience to Indian users.

These are some of the many questions many readers have asked in the ShoutMeLoud forum. While hosting is the most crucial decision of starting your blog or online business and it’s important for you to take this decision carefully.

Note: This article contains affiliate links, but every word is unbiased, and based on real-experience.

Note: This article contains affiliate links, but every word is unbiased and based on real experience.

By the end of this post, you would know: Should you buy hosting from Bluehost India or not?

Bluehost U.S. is a popular web-hosting company for WordPress & well known for innovating CPU throttling technology in the shared hosting. They also offer free SSL certificate & an easy to use dashboard for managing WordPress. Later in 2010, EIG acquired Bluehost company.

It would be wrong to say that EIG makes the technology decision to hamper the quality of their acquired hosting, rather they provide infrastructure & resources which helps these small hosting companies to grow big. The only problem is, EIG is more of a business company & their focus is on business expansion rather than helping their acquired companies to reach out to masses with their core innovations.

If you would notice, I started this post with the line “Bluehost India is the latest addition from EIG group” which could have been “Bluehost India is an extension of Bluehost U.S”, and this is an important line which explains a lot of things.

Bluehost India is launched as a business expansion & is not the same in anyways to Bluehost U.S.

I was expecting it to be an Indian version of Bluehost U.S., where we get the same cPanel (Bluehost customized dashboard), Server quality, CPU throttling technology & other services.

Surprisingly this is not true, and Bluehost India is using Resellerclub to sell hosting & domain packages. Resellerclub is a Mumbai-based company which let freelancers & individuals start their Domain & hosting business, you can read more about it here.

EIG acquired Resellerclub back in February 2014 to expand its business to India. What could be better than using the existing brand value to sell something? The only thing which EIG missed here is, Bluehost U.S. & Hostgator U.S. are popular because of the hosting & service quality along with the offering.

With Bluehost India, you will find the same or better offering, but the service quality is not up to the mark.

I even purchased one of the hosting packages to see what’s all the buzz is about? And It was sad to see that Bluehost India is using the Resellerclub dashboard & not offering the same features as Bluehost U.S.

Here is how the Bluehost India dashboard looks like:

Many new users compare hosting on the pricing difference (Even if it’s negligible) which is not the right factor for deciding on your hosting options. Pricing on Bluehost India is certainly cheaper than Bluehost U.S for a fraction of the price, but their offering is not the same.

Should you buy hosting from Bluehost India?

At this time It’s better to buy hosting from their U.S. site, & use free CDN like Cloudflare or MaxCDN to ensure your site loads faster in India too.

Bluehost U.S.A also offers free SSL certificate & PHP 7.0. These two features are yet to be seen on Bluehost India hosting.

I would love to see them offering the same infrastructure as they are offering for their U.S. site which would ensure your website remains up & you will get good technical support. For now, you should rather buy hosting from Bluehost U.S or Hostgator India.

For the learning purpose, you can check out both the sites of Bluehost (Indian & U.S. version) & compare the features & price yourself.

Have you or any of your friend used Bluehost India? How was the experience? What Bluehost India should do to improve their service quality? Share your viewpoints in the comment section below. 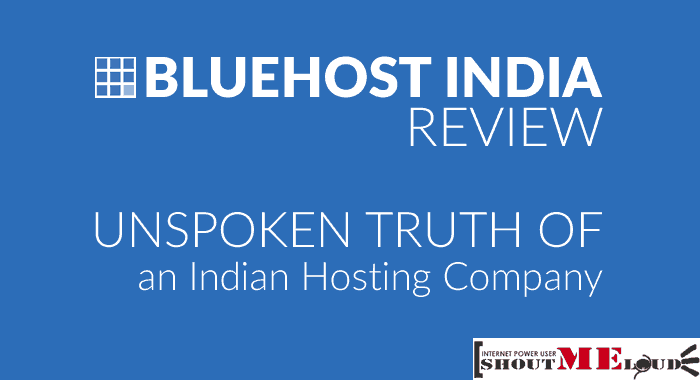 89 thoughts on “Bluehost.com Vs Bluehost India: Should You Prefer it Over Bluehost U.S.?”