One strong decision can change the course of your life & this is the story of one such decision which shaped the life of an engineer for good!

Six years ago on this very day (December 1, 2008) I moved a free blog hosted on BlogSpot to a self-hosted WordPress blog, and that’s how ShoutMeLoud was born. 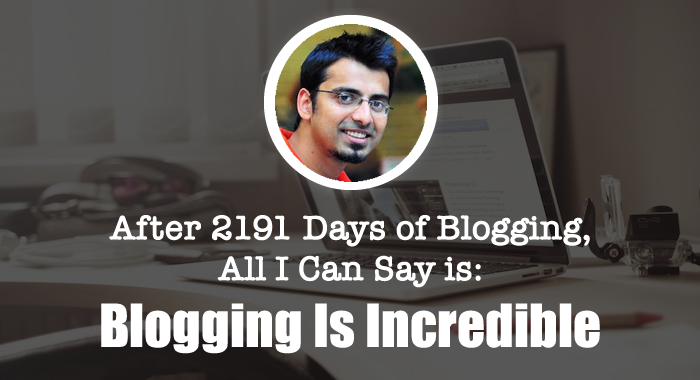 The only thing I was sure of when I was making this transition was that I was moving to a better platform for my blog.

Many of you who have read my blogging journey already know about the inception of ShoutMeLoud. If you missed reading about my journey, today I will be sharing how ShoutMeLoud came into existence, and how a variety of things happened that I never imagined would happen, even in my wildest dreams.

Today, on ShoutMeLoud’s 6th Anniversary, I am happier than words can express.  I could never have imagined how this one blog could make the magic happen for me and so many others.

If you check out the who.is details of ShoutMeLoud, you will see that the ShoutMeLoud domain was purchased on November 30, 2008,  and on the very next day, December 1, 2008, ShoutMeLoud went live on the Internet!

When I started blogging six years ago, I had no idea how to make money from a blog, and I was blogging only because I enjoyed writing and sharing what I knew. With time, I got a great response from my readers, and blogging went from being a hobby to being my profession.

Gratitude to everyone who made things happen:

On this pivotal day, I want to thank the many people who made ShoutMeLoud what it is today.

To begin, I thank Mohit Nanda, my college senior and a friend from college and the guy who taught me everything he knew about the Internet in the first place.

I would like to thank Ankit for giving me his credit card to buy Web-hosting, as that is how the ShoutMeLoud blog became a reality.

My heartiest gratitude also goes out to Mani Karthik, who helped me at the beginning of my blogging career, teaching me about WordPress SEO and about the basics of search engine optimization. I would also like to thank @HoneySingh for his consistent support and motivation, and for designing the ShoutMeLoud logo.

Thanks to all the current and past members of the ShoutDreams network, and to all those who helped create ShoutMeLoud to date.

The Journey of ShoutMeLoud: From an Idea to a Reality

In 2008 after graduating from Sharda university, all I had in my mind was to kill one year of time until I could join Accenture (the company where I got my campus placement).  Since I had time before I had to report to Accenture, I joined Convergys call center and worked there for six months. While working for Convergys, I started my first blog and I began sharing things that I knew and understood.

I had been fascinated with computers since childhood, but it was only in 2005 that I got my first computer. I spent first few days by downloading movies from torrent and using Orkut & Hi5 (Those days they used to be the most popular social-networking site).

My first few years hands-on with a computer were spent learning about the cool stuff we can do online, creating Linux servers, and playing Counter-Strike.

On the verge of my 3rd year of college, when I had not yet been placed in a company, I was cursing myself for spending countless hours on the Internet and not focusing on academics. I thought social engineering and hacking was a complete waste of time, and I felt that I should have focused more on academics.

After four failed campus placement interviews, I finally got a chance to appear at the Accenture campus drive, and fortunately the interviewer asked me about social engineering and hacking!

I wish I could describe how happy I felt after being selected by Accenture.

From Accenture to Call Centre:

After completing my engineering degree, I moved back to New Delhi (Capital City of India), and rented a small room for myself. At that time I joined Convergys, and I started getting my first salary. I was working in the graveyard shift, and like every other engineer, I was wasting the most crucial years of my life.

The good thing was, At the age of 22 I was independent, and I knew one thing: I am the master of my life, and I can shape it in any way I want.

That’s when I started blogging on a BlogSpot blog to learn & share something new. My blog was just another blog, until one day I got more than 18,000 visits.  One of my blog posts made Digg social bookmarking site homepage.  In those days the Digg homepage meant viral traffic to your blog.

Probably that was wake up call for me, as I started spending more time on my blog after that. I spend the first 2 months learning about blogging, changing themes every day (I hated that part, as it was time-consuming), and learning about blogging & internet marketing. The best thing was, I had no one around me who knew to blog, or back in 2008 there was hardly any tutorials online. Those days I had no clue about AdSense or any other ways that bloggers can make money. Later on, I learned about affiliate marketing and I quickly realized that this is the market that I needed to be in.

Quitted my job for an unknown experience:

In April of 2009, I left my full-time job at Convergys to try my luck as a professional blogger, and at some point in June, I got the call from Accenture to join them on July 6th. That was the point at which I began to feel somewhat confused about my future.

In those days and terms like “entrepreneurship” and “infopreneurship” were not as popular as they are today.  I was conflicted as to whether I should join Accenture or continue with my personal/professional venture.

The good news was that I was comfortably making 40,000 INR ($700) at that time from my blog. Thanks to Keshav Gupta (my school friend) for his wise words:  “We work at a company so that we can create something of our own in the future. You are already doing something of your own, so keep calm and don’t stop.”  And with his words, I was reassured that blogging was going to be my profession.

On the same month, 5 days after my 23rd birthday, I met with a horrible accident.

The accident was quite severe, and I had multiple fractures on my left foot (Lisfranc injury). I was hospitalized and on bed rest for six months. Initially I was frustrated & was lost for the first few weeks, as I couldn’t go out of my room.

Imagine you at the age of 23 & can’t get out of a room? It’s like being stuck at one place!

After the first few weeks, I decided to focus my energy on things that I could do, rather than things I couldn’t do. Next few months after the accident, played a major role in making me what I am today.  I spent most of my time learning about blogging and practicing it.

It was December 2009 when I was allowed to move, and by that time ShoutMeLoud started becoming popular, and people were already talking about it with their friends. It was at this time when I met Rahul Bansal, and we decided to work together to fulfill our dreams.

From January 2009 to June 2009 we worked together, and I learned a great deal from the amazing people at @rtCamp. Around August 2010, I moved back to New Delhi and decided to take ShoutMeLoud to the next level.

I opened ShoutDreams as a parent company for all the blogs in my network. I am grateful to @Siddie and Akshay Khurana for being a part of this piece of ShoutMeLoud’s inception.

Siddarth was a college dropout, and he was one of the first employees whom I hired. Siddie moved from Mangalore to Delhi, to work here at ShoutDreams.  Later on, he moved back to his home-town.

During this time, ShoutMeLoud and I were featured in various magazines, and were interviewed by many bloggers, and things changed a lot for me and around me. Blogging was growing in popularity, and it became the next big thing.

2013 was a golden year of my blogging career.  During that year I had my first opportunity to give a stage presentation, and later that year I was invited to speak at Asia’s largest hosting summit (Reseller club hosting summit).

A lot has changed about blogging, as with time it becomes the next big thing. Apart from being a cool thing to have a blog, it becomes the main source of living for me & many more bloggers around the globe. All this time, I keep adding new features & new flavor to ShoutMeLoud.

On a personal level, I started engaging myself in outdoor activities such as Public speaking, video blogging, ad shoot for companies like CitiBank.  By the end of 2014, I added features like Deals section, Video section here at ShoutMeLoud.

In 2015 my focus will be to launch a product for upcoming bloggers & for the blogging community. I will be launching smartphone apps.

Update June 2015: ShoutMeLoud SmartPhone app is available for Android & iOS. You can download the one based on your mobile phone OS:

If this is the first time you are visiting the ShoutMeLoud blog, this two-minute video will give you an overview and ideology of our blog:

Things that I learned over time:

In the past six years, I have learned many new things.  During this time many of my beliefs were broken, and I learned that life is not so simple, and it will never be a constant joy ride. There will be good days and there will be bad days, but what matters is how you deal with them.

Also important is how you imagine your life to be. One of my friends suggested that I read “The Secret“, and after reading the book, I must suggest that you to read it, too. It will help you to solve problems in a better way, and you will live a better life. This book is for anyone who would like to have a better and more meaningful life.

Here are few things that I would like to share from my 28 years of experience with life:

Have goals in your life that will help you to keep moving forward.

The key to the success is confidence.

Give as much as you can without expecting anything in return.

Success is an endless journey. Once you are on the track, you never have to stop.

Kindness is always rewarded in style.

The moment you lose the fear of losing, you will win every game after that.

When u try to see your worth from somebody else eyes, you would never know your true worth!

Before you add a comment on my six-year-long blogging journey, please check out this important message:

This is all I have to share today.  Thank you for being a part of the ShoutMeLoud community. And to share my love and joy, I invite you to subscribe to our newsletter or join us on Facebook to be the first to learn the next great thing from ShoutMeLoud!