Below are six things you should do to become less of a Facebook addict:

It is no secret that Facebook has taken over some part of our lives, and now we are an inevitable part of it. The first thing that almost everyone of this ‘Internet generation’ does after waking up is to check their Facebook accounts.

One would prefer being active on Facebook as more worthy of their time rather than other important obligations and work. Facebook addiction has now become a serious issue with Facebook standing at a whopping 1.1 Billion users worldwide.

Facebook addiction according to therapists, is a fine line between social networking and social dysfunction. Here’s what  Paula Pile, a marriage and family therapist in Greensboro, North Carolina had to say about the current conditions of Facebook addiction:

“Last Friday, I had three clients in my office with Facebook problems, it’s turned into a compulsion — a compulsion to dissociate from your real world and go live in the Facebook world.”

Pile and the other therapists were interviewed by CNN and were quick to say that Facebook itself isn’t the problem and that the vast majority of its 200 million users probably function just fine.

She says problems arise when users ignore family and work obligations because they find the Facebook world a more enjoyable place to spend time than the real world.

With the advent of technologies, it has now become accessible more than ever. This simply supplements your addiction to Facebook and brings everything to your fingertips.

Use of Facebook as a means of communication and connectivity with the ones you care about is good. But it shouldn’t lead to the point where your offline social life gets replaced by social life on Facebook.

Are you not sure about how much of a Facebook addict you are?

No need to worry.

Below are 5 surefire signs that you are turning out to be a Facebook addict. You can also take a ‘How addicted to Facebook are you?‘ quiz at Oatmeal.

Do you get anxious after making an update on Facebook?

Do you delete updates which don’t get likes?

It’s a well-known fact that Facebook is so addictive because it offers instant gratification. Facebook brings about a sense of reward among its users, and that’s why users get hooked to it.

According to Dr. Dar Meshi, of Germany’s Freie University, looked at the activity in this part of the brain in 31 people and compared the results to the people’s Facebook usage.

‘As human beings, we evolved to care about our reputation. In today’s world, one way we’re able to manage our reputation is by using social media websites like Facebook.’

Everyone loves getting a like or a positive comment but make sure you don’t get obsessed with it.  At least, not on the virtual world. Many users suffer from Low self-esteem because their updates didn’t perform better than their close friends or relatives.

None the less, if you count your worth based on number of likes you get, my friend you are going to get into serious relationship issues with your friends, family & any other in real life, because real life lacks a like button.

People are now so busy with Facebook messaging, sharing photos, updating statuses, commenting and liking other posts that they simply forget they have a physical life too!

If you are compromising your physical life for a better appeal on Facebook, you are a Facebook addict.

All you do on Facebook is to pretend as someone you are not in the real life. You assume all this for being appealing to others. If you are compromising a good night’s sleep, a walk in the park, a cup of coffee with a close friend, real-world get-together with friends, for Facebook, you are a Facebook addict.

At the end of the day your deeds, responsibilities, and obligations count rather than the number of likes you get on Facebook. You have a life to live and don’t compromise your precious time for pity updates on Facebook.

3. You are obsessed about reporting everything

In the times when a lot of the people are concerned about their online privacy, some of them just cross the extent and post about their sensitive and intimate lives on Facebook. If you explicitly reveal your anger, excitement, feelings and thoughts about others on Facebook, you are an addict.

Everyone of us has a Facebook friend that somehow always manages to get into our Facebook newsfeed with a status update, or a like, a share or a check-in. These people are too busy on Facebook sharing every mundane task they are going through.

This is a sign of an addict. These people need to remind everyone that they exist and show how much fun they are having when in fact, all they do is just pretend.

The number of Facebook friends you have has somehow now become more of a symbol for a ‘higher’ social life. If you take a look at the number of friends your friend has managed to gather, and you simply keep on adding more people to your friends just to show off your social life, you are an addict.

One must realize that the number of Facebook friends is just a ‘Number without any meaning.’ Relationships are made with meaning and not by numbers.

5. You spend more than an hour on it every day

It is very difficult to pin-point the exact amount of time spent on Facebook is too much. The time factor, in turn, depends on various aspects of your current duties and obligations and the amount of free time you get not the time you make up.

But according to many therapists, anything above over an hour of daily Facebook users should indicate you are stepping over the line. Paula Pile, a marriage and family therapist, had to say this about time spent on Facebook:

“I can’t imagine that anyone would need more than an hour a day on Facebook, and probably no one needs more than 30 minutes.”

Too much of anything is bad, and so it goes on Facebook. Facebook is just another service and doesn’t let it become your daily habit.

So are you a Facebook addict? What makes you think so? Share your views and opinions below. 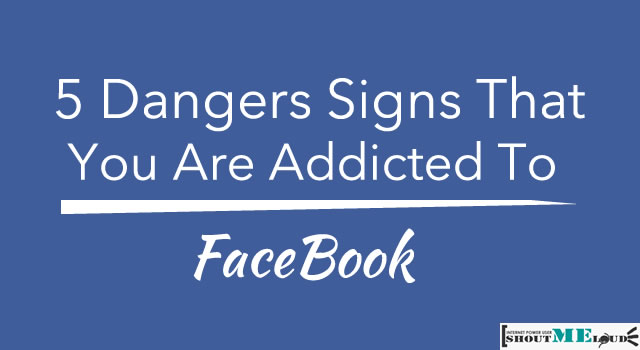