So far we have covered some interesting facts and tutorials related to Google Panda.

If you have missed out on any of them, I suggest you check out:

All those who were affected by the Google Panda algorithm also know how tough it was to get out of it.

As I discussed with many bloggers who had lost more than 50% of search engine traffic, and obviously a big decrease in their monthly income, they had nowhere to go. The biggest problem is that despite all of the measures taken to recover, all new posts still won’t rank well because the domain has been penalized by the Panda update.

This is because Panda works on the domain side and not on the individual post side. So if your traffic is dropping, it’s high time that you work on your blog’s missing SEO points and recover from Google Panda ASAP.

Getting back to the point…

I have noticed that many auto-feed blogs are ranking better in search engines. Regardless of whether it’s a new auto-blog or an old one, it will still outrank your current blog ranking.

Here is an example from my latest post. I searched for some text from my post in Google and found that another blog which had copied the post is ranking higher than me: 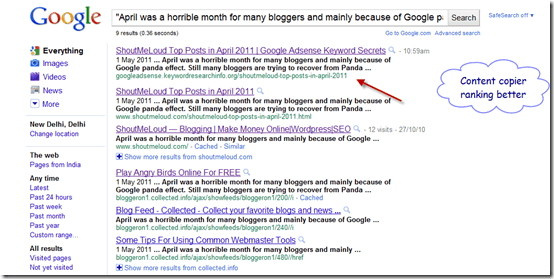 The Google algo is too dumb to understand and analyze that it’s copied content. This is the screenshot of the post which has copied my original post and is ranking higher than my (original) post. 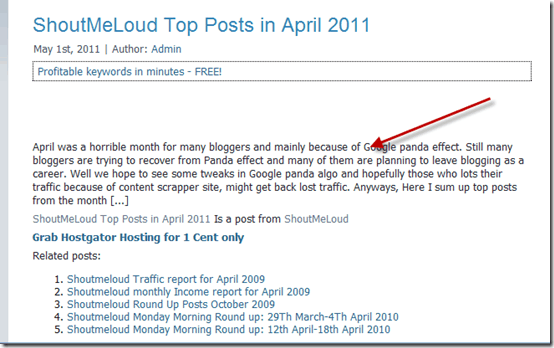 Anyway, I have reported that blog to Google to remove them from Search. But in the last 3 weeks, one thing which I have realized is that it’s important to offer a partial feed rather than a complete feed.

From a reader’s point of view, it might be little annoying, but there is no better solution. As such, auto-blogs will be publishing these partial posts and within some time, Google will mark them as content farms with low-quality content.

Along with your DMCA report to Google, this will help to bring down the ranking of that blog.

I just tried with one blog which copied all of my articles from CallingAllGeeks. I reported almost 100 pages to Google along with a few new posts that I’d changed the feed settings on to partial feeds.

Now that blog is completely out of Google Search. Though it was a long and lengthy process, the good thing is that CallingAllGeeks has started recovering all of its lost traffic after the 9th April Google Panda update.

How to configure partial feeds in WordPress:

In WordPress, you can easily convert your complete feed into a partial feed with one click.

Go to your WordPress dashboard. 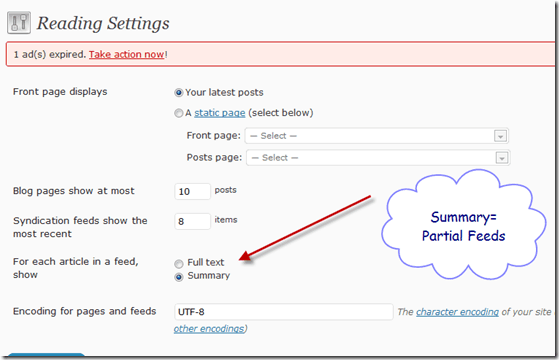 From now on, all new posts will be sending partial content, and users will have to click on “Read More” to see the complete posts. One advantage of this feature is your readers will actually come to your blog instead of reading posts in their feed reader.

Also, there may be more ad impressions, more page views, and more comments on your page.

How to configure partial feeds in BlogSpot?

Log in to your BlogSpot dashboard and go to Settings > Site Feed.

From here you can configure how you want your feeds to be displayed.

So far, I can see some advantages of using partial feeds over complete feeds especially since Google hasn’t tweaked its algo to make sure content copier doesn’t get a higher ranking.