TED talks have now outgrown themselves from a conference that started with the motto “Ideas Worth Spreading” to a global leader and an inspiration machine. People, entrepreneurs in general, are always on the look for that spark of inspiration that pushes them to go ahead with their ideas and build the thing. 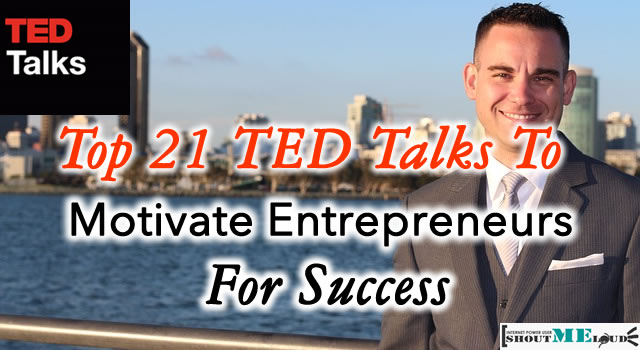 TED have managed to gather top notch people from different industries to give talks that are open for the world to watch and get inspired. This is the only best source of inspiration for entrepreneurs these days, where you can’t get anything without hurting your pockets! Entrepreneurship is a never-ending journey of learning, self-sacrificing and re-doing yourself. The most common traits found in almost every successful entrepreneur are – Inspiration and Perspiration.

Ideas left untested is worthless and Hard work without Vision is futile! That’s where TED steps into light. TED talks are the best source of inspiration for entrepreneurs, period. TED talks not only provide entrepreneurs with the necessary inspiration, but also the motivation and ideas needed to execute them. Here, I compile a list of the best TED talks videos that are aimed for entrepreneurs to motivate themselves for success.

Watch. Get Inspired. Do it.

Daniel Pink: The puzzle of Motivation

“If you want people to perform better, you reward them, right? Bonuses, commissions, their own reality show. Incentivize them. … But that’s not happening here. You’ve got an incentive designed to sharpen thinking and accelerate creativity, and it does just the opposite. It dulls thinking and blocks creativity.”

Daniel Pink is the best-selling author and the former chief speechwriter for US Vice President Al Gore. The form of motivation that arises due to making more money is the worst, although it pushes us to do things. He states the stats that shows people perform worst under the motivation of making money.

Steven Johnson is the best-selling author of seven books – on the intersection of science and technology with a touch of personal experience. Entrepreneurs love that ‘Eureka!’ moment, but Steven Johnson points out with a story that its not as easy as it looks!

Seth Godin: How to get your Ideas To Spread

Marketing guru and self-help author Seth Godin explains here why bizarre and eccentric ideas work far better than boring ones. Being is safe is risky, as the man says. The spreading of idea is far more important than the idea itself. Seth Godin also takes the example of sliced bread, which wasn’t ‘sliced’ until 15 years after the invention of dough bread.

“If China and India were as rich as the United States is today, the market for cancer drugs would be eight times larger than it is now.”

Economist Alex Tabarrok’s talk is all about the notion of idea sharing. Creating a community around your idea is way more important. He takes the example of free trade globalization, creating a healthy community by sharing more than ever.

Gary Vaynerchuk: Do What You Love

The most important thing Gary Vaynerchuck says in his talk is there is no reason for you not doing what you love. Its all about the ‘doing’ here. If you are more of a dreamer, than a doer, this talk is aimed right at you.

Scott Dinsmore: How To Find And Do Work You Love

“Taking up jobs to build your resume is the same as saving sex for old age.”

Tony Robbins: Why We Do What We Do

“The defining factor [for success] is never resources; it’s resourcefulness.”

As an entrepreneur, your choices matter. The choices you make on a daily basis make a difference in the long run. Here. Tony Robbins analyses the reason that motivates us to do things.

Dean Kamen on Inventing and Giving

[Chuck’s wife] was standing behind me at the time and she said, ‘Chuck hasn’t fed himself in 19 years. So, you’ve got a choice: We keep the arm, or you keep Chuck.’

The man with more than 150 patents under his belt, meet the man of inventions – Dean Kamen, the inventor of Segway. Here he talks about the idea development of Segway, portable energy and water purification for developing countries.

“People don’t buy what you do; people buy why you do it.”

Simon Sinel – An author, motivational speaker and strategic communications lecturer at Columbia university, talks about a simple yet powerful model for inspirational leadership.

“Engineers, medical people, scientific people, have an obsession with solving the problems of reality, when actually … once you reach a basic level of wealth in society, most problems are actually problems of perception.”

Rory Sutherland, the Vice Chairman of Ogilvy & Mather, one of the biggest advertising/marketing company in the world; talks about “real” value. He gives out a humorous and insightful analysis that is a must watch for every entrepreneur and marketer.

Malcolm Gladwell – An author and journalist gives us an insight into the food industry making spaghetti sauce, and tells us about the nature of choice and happiness. The food industry used to work in a way that asks the customers what they want. The fact is, people don’t know what they want!

“If you’re talking about entrepreneurs in conflict and post-conflict settings, then you must talk about women, because they are the population you have left.”

“The interesting thing is: if you do it for love, the money comes anyway.”

Success analyst and speaker Richard St. John says that people succeed – Not because they are smart, not because they are lucky! He surveyed 500 successful people for the reason they were successful and he outlined the 8 common secrets to success in his book “The 8 Traits Successful People Have in Common: 8 to Be Great” and also in his TED talk above.

David Logan focuses on how to be a leader that gets work done and motivates people, all at the same time. The concept of Tribal leadership by David Logan has wider applications in businesses of all sizes and shapes. Logan describes about five levels of tribes/social groups and how to focus form one stage to another.

“[A conductor’s] happiness does not come from only his own story and his joy of the music. The joy is about enabling other people’s stories to be heard at the same time.”

Entrepreneurs ought to exhibit leadership and management skills. Bringing all things together is the major task of an entrepreneur. Here, Italy Talgam talks about how entrepreneurs can take a page from the book of orchestra conductors.

No need of introduction for the man who turned a record shop into a Virgin Empire. This talk revolves around the life experiences, near-death events and his motivations. A great way to get tips from one of the finest Entrepreneur of the decade.

Work isn’t done at the office table, meetings are nothing but a waste of time and deadlines are deadly! Jason Fried, the co-founder of 37signals, outlines them in his talk, about work-related problems and gives suggestions to fix your broken office system.

“There are thousands and thousands of people out there leading lives of quiet, screaming desperation, where they work long, hard hours at jobs they hate to enable them to buy things they don’t need to impress people they don’t like.”

Even though you might be a big hit in business, your personal life takes the toll for it. Nigel Marsh, an author co-founder of Earth Hour, talks about the importance of work-life balance for entrepreneurs.

De Botton, writer, philosopher and entrepreneur, engages the audience in a witty, quick-paced and intelligent talk about the crisis we are facing on an unprecedented level.

Psychologist Shawn Anchor transforms into a comedian in this talk. He talks about reality distortion, the lens through which your brain views the world becomes your reality. This is a highly enjoyable video where you gain a deeper insight into the secret of happiness and its effect on your work.

So, that brings us to the end of this massive list of TED Talks for Entrepreneurs to find their motivation for success. Have we missed an of your favorite TED Talk for entrepreneurs? Shout out your thoughts and comments below.