Making anything viral is an art, and most of the time we don’t even know which one of our post is going to be viral on any social-media platform. Though there is one thing which we can usually do is, copy the idea from stuff which are already viral. It might or might not go as viral as earlier stuff, but copying something viral will surely amplify the reach. None the less, it’s always a treat to know which kind of stuff are most popular on social-media sites and popular enough to be called viral.

Facebook is one of my most prominent marketing channel, and you would always see me trying various kind of updates on ShoutMeLoud official Facebook page here or sometime on my personal Facebook page here. Today I was wondering what kind of stuff usually goes viral and to dig down more, I started looking for images on Facebook which went viral. While researching, I got this idea of making a list of images which are already viral on Facebook, so that you can also understand what kind of images people love to like and reshare on Facebook. Next time when you are making a social-media strategy for your business page or for personal branding, you can plan something based on these images, and see how it works out for you.

The photographs shown here went viral on Facebook. Some of these evoke sadness, some nostalgia and some happiness. The takeaway is most of these images are thought provoking or trigger certain emotions. So next time, ensure that your updates are personalised enough to create same buzz. If you are not a marketer, simply enjoy these 21 images which got immense love and like on Facebook.

Radio station Nu92 posted this image on Facebook on October 7 with the caption “who remembers having to do this to their schoolbooks?” No surprise, the image received an insane number of like and comments. The image got 98,565 comments and 1,222,487 likes on the site. 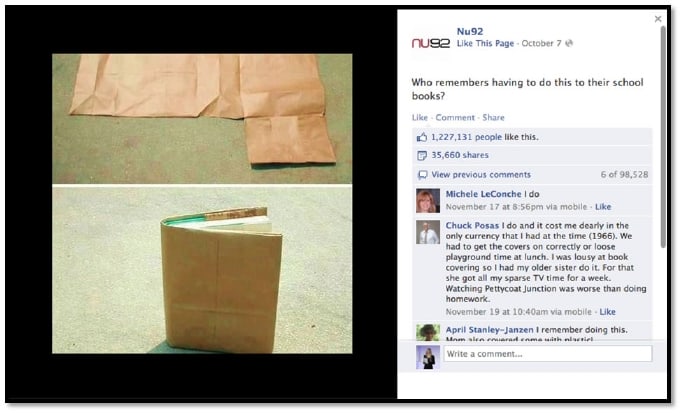 NBC Charlotte posted the photograph of the world’s oldest woman Besse Cooper. Besse is from Georgia and celebrated her 116th birthday on 27th August, 2012. The image was liked 1,303,862 times and 35,375 people gave Besse their wishes. 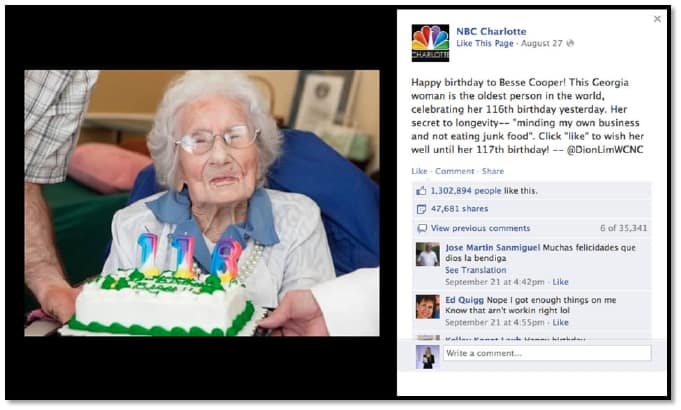 3. We All Pretended To Be Movie Stars With These

The Facebook page “Echoes from the past” posted the following image with the caption, “Anybody remembers candy cigarettes?” It brought back the good old childhood days when all of pretended to have one of these and become the villainous movie stars. This was one thing that parents never stopped us from buying. The image received 1,292,249 likes and 119,823 nostalgic comments. 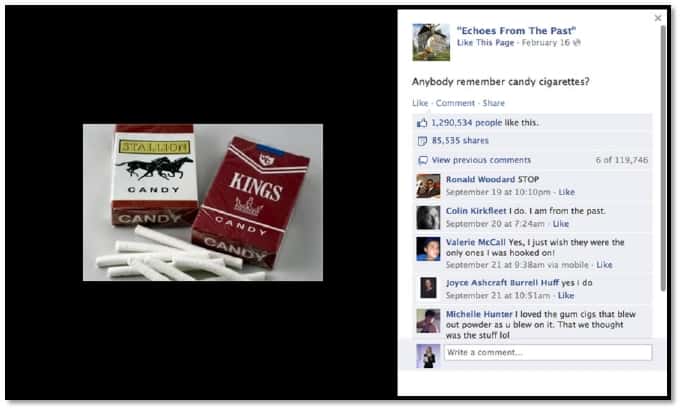 Time flies by and we don’t ever realise how much has changed. So, when the old day memory of the high beam switch was shared by Are We There Yet, it received 536,202 likes and 889,952 opinions.

5. A matter of honour

This moving image was shared by the page “Once a marine, always a Marine”. It shows the wife of 2nd Lt. James Cathey who was killed in Iraq. The day before his burial, she denied leaving the casket, sleeping next to him for the last time. Te image portrays so many emotions at a time. It received 1,488,691 likes and 55,505 comments. 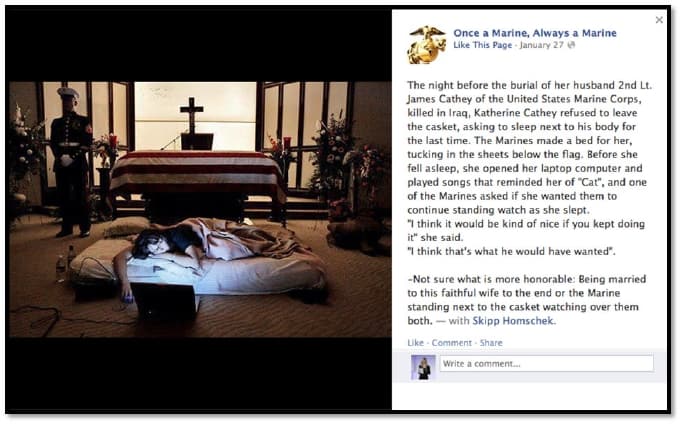 6. Animals are capable of loving too

This image shows how loyal animals can be when today; a human is not dear to another human. The dog in the picture is a German shepherd who has been sleeping next to the grave of his master for the past six years. This picture shared by Paw Justice received 77,780 comments and 1,480,812 likes. 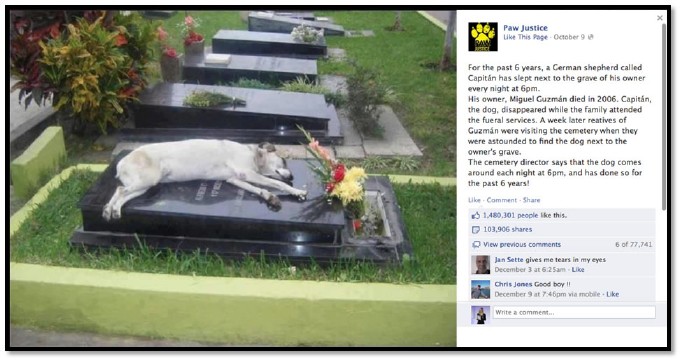 7. Heaven in the midst of Sea

We love good company and great vacation spots. So, when “I love the Ocean” posted the following image, it received 118,731 approvals and was liked 1,532, 109 times. 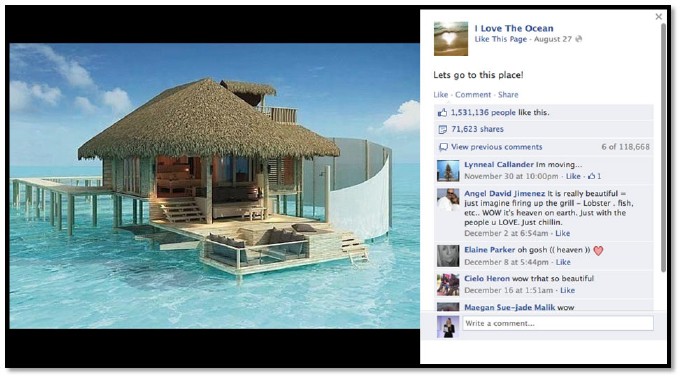 Was sees more sacrifices than any other disaster in the world. In this soulful image, this about to be deployed dad is overwhelmed with emotions at having to leave his just born baby girl. When singer Matt Rogers posted this image on his page, it received 1,612,028 likes and 49,313 comments. 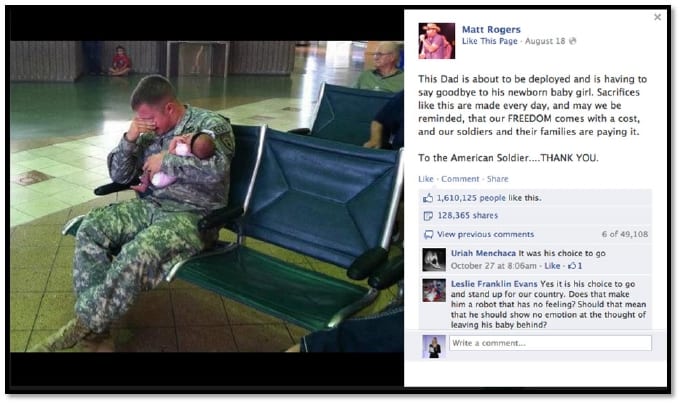 9. The bounties of the nineties

We all miss the 90s times. There were emotions and less professionalism. There was time to earn and time to spend. No doubt it was one of the best times for the people of today. So, when pictures such as these are shared, we get in the reverie mode and as is evident, like the image 1,604,039 times and put in 64,994 comments. 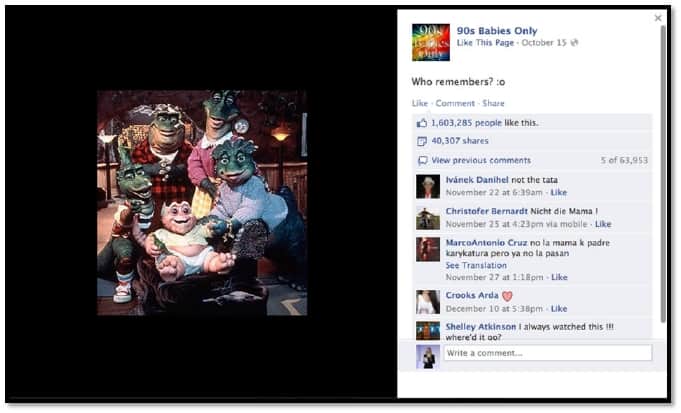 A Facebook user Ann Gabhart shared a picture of her niece who became free of cancer after 969 days and going to celebrate her victory over cancer at St. Judes. The image received 1,677,978 likes and 56,321 people gave her their blessings. 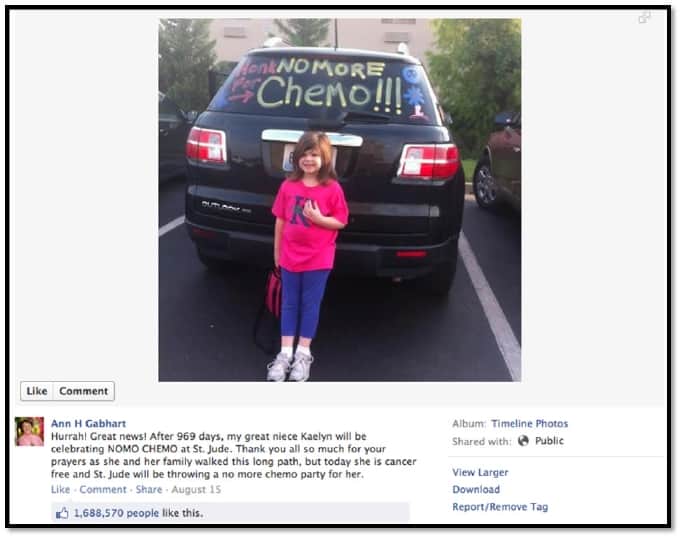 12. Oh Auntie Em, there is no place like home

We all were in awe of the classic “The wizard of Oz”. No wonder! The sets were stupendous and the film effects were way ahead of the time. When Olde town antiques and upholstery shared this image, 1,813,290 people liked and 95,681 people shard their favourite dialogues from the move. 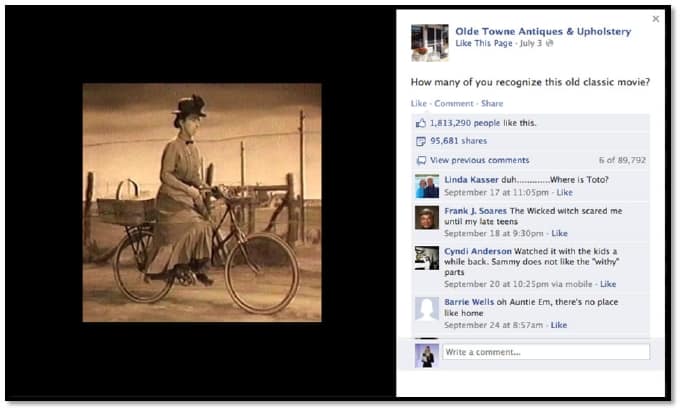 When Stronglite took a poll for asking how many of us want to be there in the picture, 1,886,532 people gave it a thumbs up and 231,607 people mentioned their approvals. 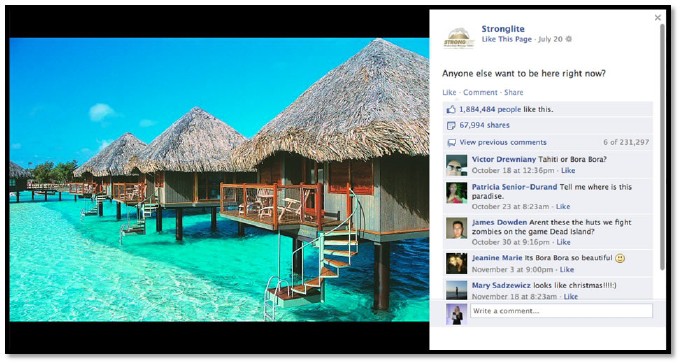 14. Vote of thanks from Mr. President

When Barack Obama expressed his gratitude to the people of America on being selected as the supreme head of the state, he received 84,669 compliments and 2,093,441 likes. Surely, the people love him! 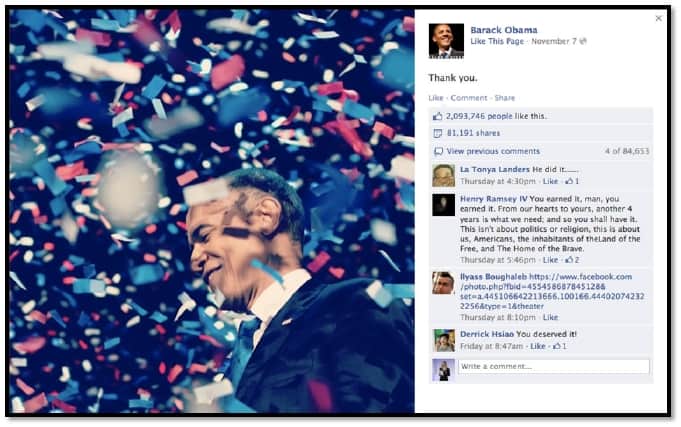 15.  It is the little things which count

It does not take much to help others. It is just a matter of priorities. The Facebook page “It’s All about Women” shared a similar story some time back. A taxi driver was hired by an elderly woman who was shifting to hospice. He spent his entire shift taking her to the places which were important to her one last time. In the end, he refused to take any cab fare. The story shows that it does not take much effort to create a difference in someone’s life. The picture received 2,050,571 likes and 234,461 comments. 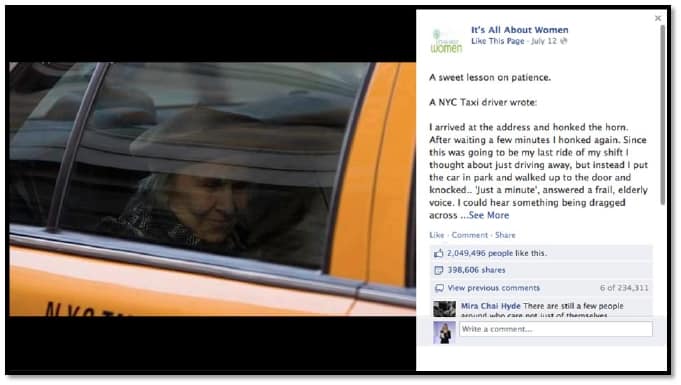 The only thing in this world which is above everything is a mother’s love. It crosses all barriers. No matter how the child is, the mother cares for and loves him till the end. This is the image of a five-year old girl, Adalia Rose. She has a rare disease called Projeria which makes her old incredibly fast. She posted this picture with her mom who shaved her head to be like her. People liked this photo 2,262,792 times and prayed for her well being 54,654 times. 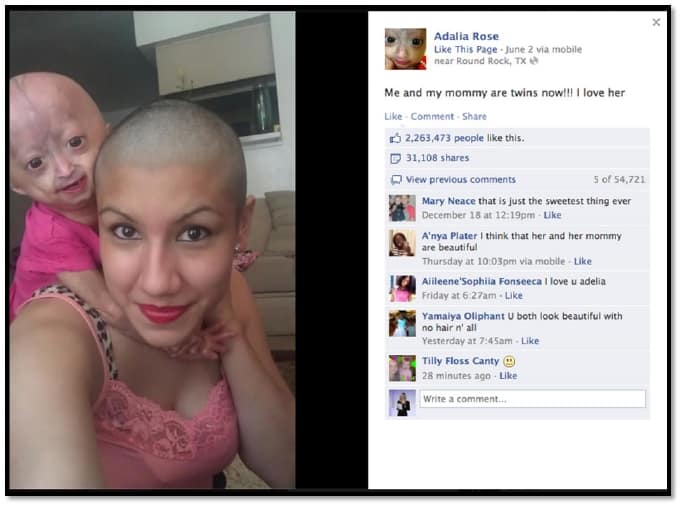 The most loved person of America, Barack Obama, when posted this picture with the First Lady, 4,439,756 people approved and 215,510 commented.

18. Have respect for those who gave you life

This image is a respect for all those who sacrifice themselves to keep us safe. A Facebook user posted this image in the memory of a martyr. It was left on the table by one of his friends with the note. The bar tender let it sit on the table till 11.30 p.m. but put it on Facebook as reminder that he was not forgotten. More than two million people have liked this image. 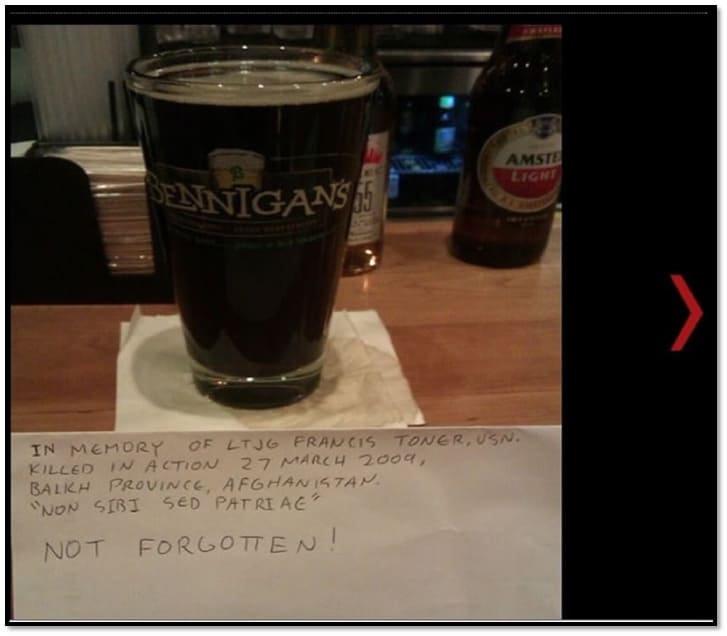 Once again, the old times have come back. When asked about the place, more than 1.4 million users remembered having shopped here. 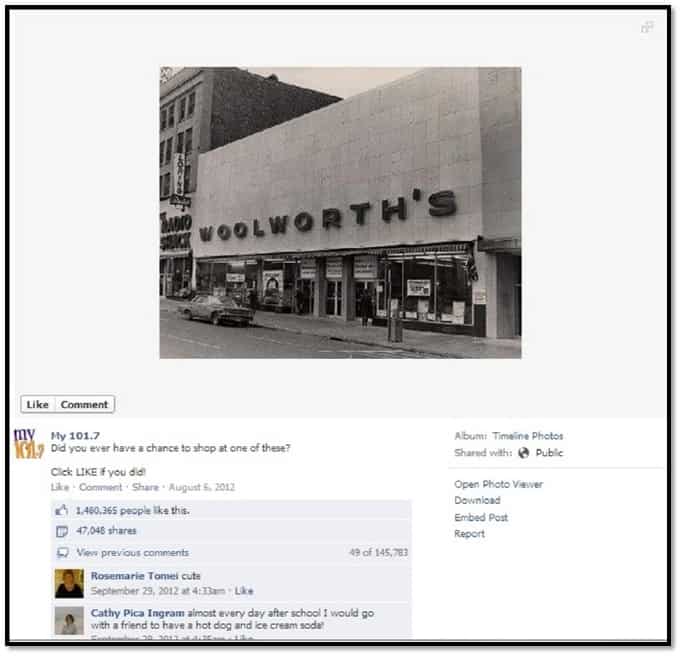 This little girl seems strong willed to get back her dad who is helping in keeping the country safe. She was encouraged by 1.3 million people. 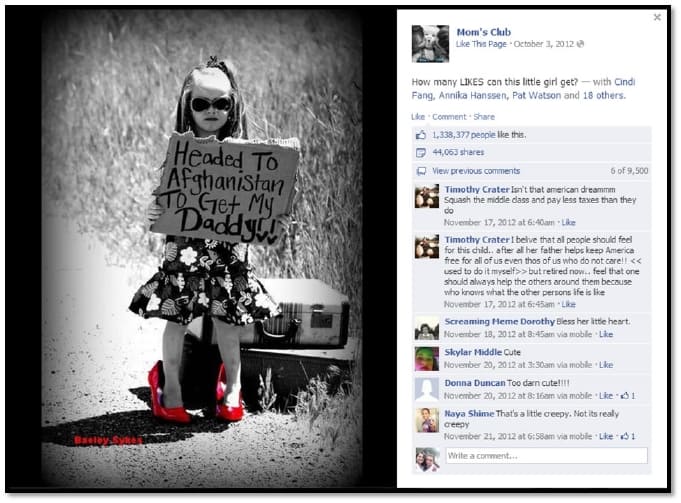 Who said legs were needed to fly? This little boy says so. And, so do the 1 million people who agreed with him on Facebook. 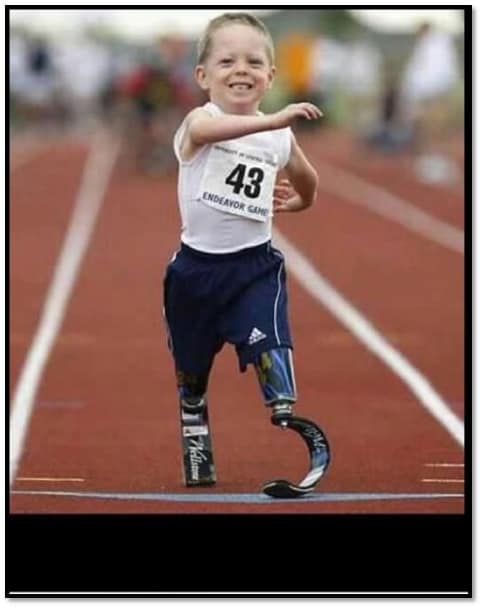 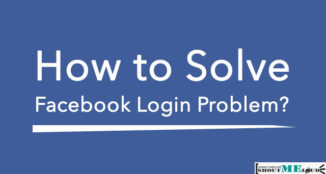 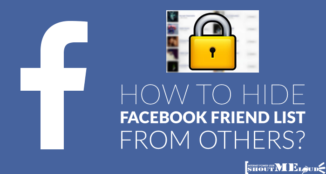 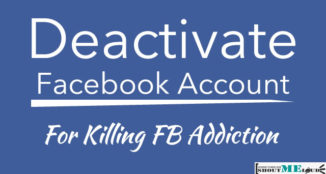