Update: This article has been updated with new link Tweeted by Matt Cutts for reporting scrap sites.

Months back Google rolled out improve algo to fight against Scraper site and later Google panda rolled out, instead of eliminating scrapper sites from Internet, Panda increased the ranking of many scrapper site and even original content was outranked by such scrapper site. Bloggers like me worked day and night to report such posts to Google DMCA & spam report team but in vain, since the system is automated, you might end up reporting hundred such pages every day but next day you will find another hundred such posts. Later on I changed my blogs feed to partial feed to help Google understand which is original content and also to avoid duplicate content penalty.

Anyways, if you are like me who have been facing issues with such spam sites, here is a news which might interest you. Google is working on understanding the scrapper sites better so that they can improve their search engine Algorithm to fight against them. And for the same reasons they are asking webmasters and bloggers to help them by reporting such sites using a form. (Link below).

If you see a scraper URL outranking the original source of content in Google, please tell us about it: http://t.co/WohXQmI45X

This is not the same as reporting DMCA but helping Google to understand which sites are content scrapping site will help Google to modify their algorithm to automatically remove such spam sites from search results. 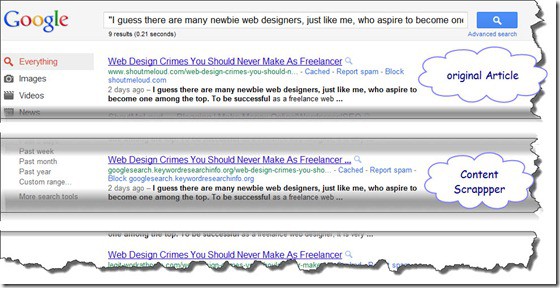 In case if you are not aware of what scrapper site is, it’s a spam site which is created for either creating revenue, outrank original site or improve ranking of other sites by linking to other sites. Reason could be anyone but by the end it’s the original author who faces the consequences.

Personally, in last 4 months I have reported over 1500+ such links to Google web spam team and filed a DMCA using Google DMCA form and seems like there is no end to it. This news actually given me a sign of relief and I hope in near future, I expect such spammy sites to die. Google should also implement a way, so that anyone can report the complete spam domain, instead of reporting individual posts which is a tedious job.

If you are a blogger, you can always find duplicate content using plagiarism checker tools and fill out this form and help Google to understand why content scrapper sites are ranking better. Filling out form is easy, simply search in Google using your title or a line from any of your  last 3-4 posts, put the search term you used and add original link and the scraper site link. (Link of the page where your content is copied). Hit back button and similarly report other pages too.  For every domain which copied your post, do it atleast once. 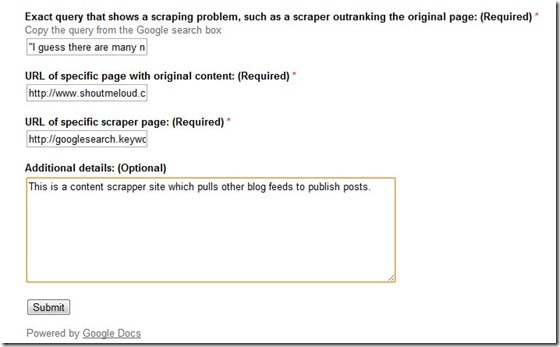 I hope to see Google working on new algo soon and removed all such content scrapper sites from Web index. This will directly helps in increasing search engine traffic to your site and also increase in revenue. Anyways, for now go ahead and fill out the form.

Are you also a victim of content scrapper site? What actions have you taken till now to fight against them?