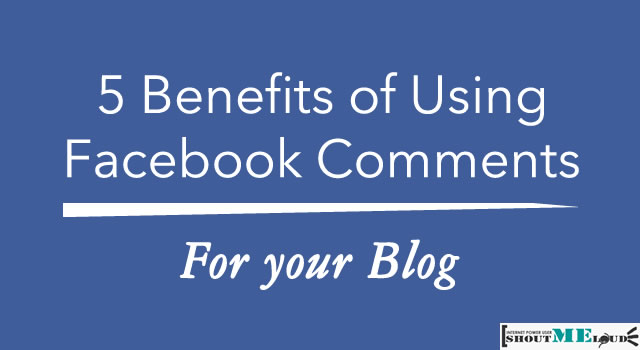 Blogging evolved as a platform for people to express what they have to say. And as any conversation goes, blogging is almost always two-sided. Most of the popular blogs have comments enabled, and they use various platforms to deal with managing them. Even Seth Godin, the master marketer who does not allow comments on his popular blog, says comments are terrific. Comments often help blogs build a community. So when you are considering what to do about this crucial topic, you ought to pay some attention to what I have to say.

Facebook offers a commenting service outside of its own website. Let me clarify what this post is going to be about. I will not be teaching you how to integrate Facebook comments. (To do that ShoutMeLoud already has a fantastic guide for BlogSpot and for WordPress you can use this easy plug and play plugin. What I will be talking about is why you should be using Facebook commenting system on your blog. And how you can design the comments and curate them to get maximum out of it.

There are a few main reasons why Facebook comments are better than other systems like Disqus. Firstly you should know what are the main strong points and then you should optimize your site for it.

This discussion was a hot topic with my team at SpeedMango. We were divided into two camps. There were many pros and cons of using Facebook comments on our blog, and one major cons was the control of comments. Integrating it with WordPress, and making most out of it. So the team gathered and the debate began. Facebook offered some perks, but we would be selling our soul (actually data) to the devil. The debate extended for a while, and in the end Facebook won. Let me list out few reasons which made us opted for Facebook comments over WordPress comments.

Why you should use Facebook Comments on your Blog:

Everyone uses Facebook almost daily. When you embed Facebook comments, you end up using the viral nature that Facebook has built into the comments. When people comment on something, it shows up not only on your blog but also in their news feed. Their feed gets viewed by a lot more people. Most of the times their friends are likely to be completely unaware of your website. So what this does to summarize is ‘it puts your website in front of new audience’. This new audience has a high probability of having similar interests as the person commenting on your blog. This further adds to the likely hood of you getting a new returning visitor.

2) It leads to higher conversations.

When you see a random person giving his or her opinion, you care less about it. But if that person is someone you know, you are much more likely to get over the inertia and type out what you think. This is the same reason why Facebook comments leads to more dialogues in websites. Also another important thing you should note is that the Quality of conversations drastically increases with Facebook comments.

Normal comments have a ‘Name’ field. Now think what happens if I put in ‘Bill Gates’ in that field. Everyone will assume its a fake person. But what happens is often there are popular people who might like your content. These are not necessarily billionaires, but people with authority in their chosen fields. What you want to do is to give credibility to people who are commenting on your blog. If the same comment I was talking about earlier was from Bill Gates’s authorized Facebook account, people would automatically trust it.

Facebook does a lot of work to avoid fake accounts and spammers on their site. It is but obvious that some people still manage to get through. But the good thing is compared to any other platform, I can safely say that Facebook probably has the most spam free commenting system. And the good thing is that you are not making the process of commenting any more tedious for the sake of spam avoidance. So that counts as a big plus point.

More over, you will get rid of people commenting on your blog just for the sake of links, instead you will be getting genuine users commenting because of your write-up. Being a blogger I know, how important it is to get a genuine comment, than just another comment.

5) It makes commenting great for the lazy.

I have to admit something. Today everyone is lazy. We want to do things in less clicks. We want to type without picking up our fingers (Swype). So today’s websites/blogs can not afford to have a long tedious process for commenting. Its our job to make it as simple as possible for anyone to put their thoughts down. Almost everyone is logged into Facebook as soon as they power on their computers. So with Facebook comments, they dont have to do anything more. Works just great!

And to finally sum it up:

Authored By ankurak
Ankur is the CEO and in house automotive expert at www.speedmango.com