Facebook is most popular Social networking site but despite of various advantages of Facebook, there are many other side of Facebook. When it comes to work, Facebook is biggest productivity blocker site. Due to this, most of colleges, schools and companies block Facebook and similar sites.

Even in many countries like Pakistan, government ban Facebook to save their religious values. In 201o,  Facebook was Banned in Pakistan after Pakistani government imposed an order to ban Facebook. This action was taken as One page name “Everybody Draw Mohammed Day” was encouraging users to draw and upload images of Prophet Mohammad and according to Islam it was not allowed.

Here I’m sharing some tips to unblock Facebook and you can use this tips in pakistan or any other country for accessing Facebook or any other blocked site.

Banning a social networking site because of misuse by handful amount of people is something not justified and this is more like some thing happened in China some time back when they banned Blogspot, Flickr and Twitter.

The best & most reliable way to unblock Facebook is by using a VPN software. These days VPN software works pretty well even on iPhone & Android devices. Most of the entry level VPN software’s are free & it’s a good starting point. For an hour usage of Facebook, the free plan is more than sufficient. If you are a Facebook addict (You shouldn’t be 😉 ) in that case you can always upgrade to unrestricted VPN plan.

Here are some of my favorite VPN software’s:

Freegate is one of the best Ultrasurf Alternative and it’s a small software which requires installation. Setting up is easy and within minutes you will be able to access any blocked website.

Ultra surf is a proxy tool which will let you surf Internet via proxy. You need to change your internet connection settings to access websites including Facebook. This one is available as desktop software & chrome addon.

You can download Ultra surf Chrome addon from here.

Here is one: HidemyAss

According to me, safest way is VPN else use Your-freedom with HTTPS on.

Do let us know which method helped you to unblock Facebook in pakistan or in your country. Also, what other methods do you use to access blocked Facebook.  I hope, you able to take this challenge by accessing Facebook and  let us know on our Facebook fan page. 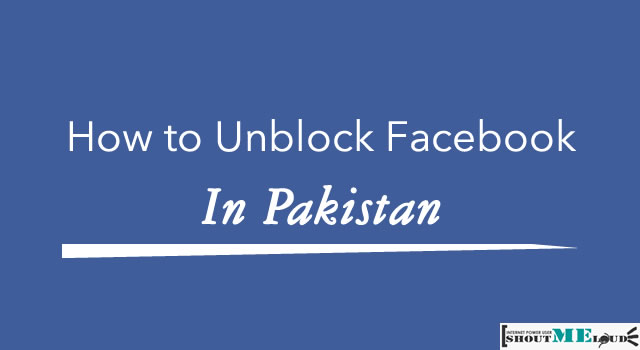