While the world has witnessed some of the genius inventors and industrialists who have gone on to change the world, there are very few of them of the caliber of Elon Musk.

We all adore the inventions of Nikola Tesla, Alan Turing, the Wright brothers, Henry Ford and so forth. Their work has inspired and challenged the traditional practices, making way for something that was never conspired before.

Let’s take a dive into the life of Elon Musk and how this visionary genius has inspired mind-boggling innovations achieving what very few can dream of! 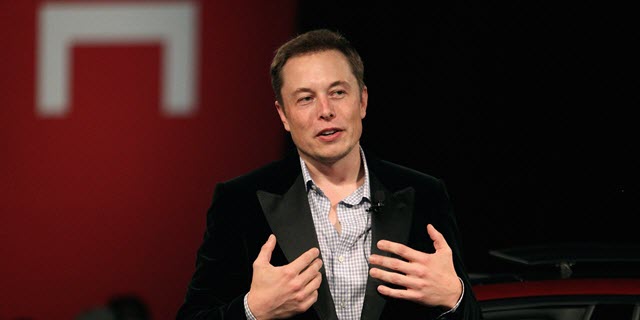 Who is Elon Musk?

Well, for those of you not aware of Elon Musk, he’s the guy behind PayPal, SpaceX, Tesla, SolarCity and a few other innovative attempts at making impact on a global scale.

Elon Musk is an Engineer, Inventor and a Visionary leader of the unimaginable sorts. His company X.com (now PayPal.com) has revolutionized the payments industry once and forever. His company SpaceX became the first privately-funded company to launch a rocket into the orbit, bagging a $1.6 Billion investment from NASA and another $1 Billion in funding from Google and Fidelity.

Currently on a mission of reducing the costs of space travel by a factor of 100 and colonization of Mars, Elon Musk is the 21st-century inventor. He’s also been working on Hyperloop, a high-speed, solar-powered transportation system, capable of transporting from Los Angeles to San Francisco in 30 minutes.

Elon Musk talked in depth about Hyperloop in a 58-page presentation. Being personally involved in all of the development processes of the electric vehicles and spacecraft, Elon Musk is more than just your perception of a regular entrepreneur.

A self-made billionaire and an ingenious innovator of the modern times, here’s Elon Musk in the words of Sir Richard Branson:

“Whatever skeptics have said can’t be done, Elon has gone out and made real. Remember in the 1990s, when we would call strangers and give them our credit-card numbers? Elon dreamed up a little thing called PayPal. His Tesla Motors and SolarCity companies are making a clean, renewable-energy future a reality…his SpaceX’s reopening space for exploration…it’s a paradox that Elon is working to improve our planet at the same time he’s building spacecraft to help us leave it.” 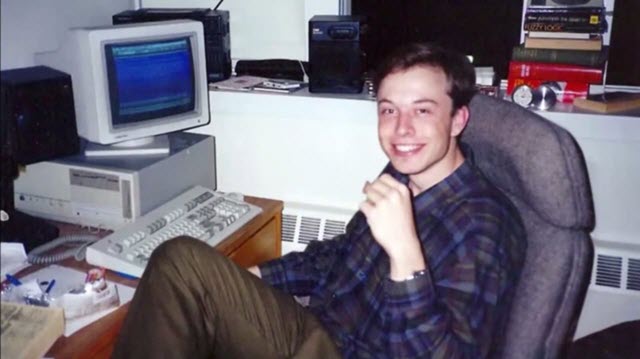 While all of the sugar-coated information above might leave people assuming Elon Musk as a spoiled rich kid, with millions of dollars of inherited wealth and extravagant toys, Elon Musk happens to be exactly the opposite.

Born in Pretoria, South Africa, to a British Engineer and a Canadian Dietetics expert, Elon Musk was the oldest of the three children. Having bought his first computer at the age of 10 and written his first own game at the age of 12, he made his first $500 selling one of the Space Invaders-like game.

After having decided to move to the United States at the age of 17, after completing his secondary schooling. Instead, Musk left for Canada and got enrolled at the Queen’s University in Ontario at the age of 19. His calling came when he received a scholarship from the University of Pennsylvania and he moved to the United States, earning a Bachelors of Science degree in Physics.

He continued his education further, earning himself a Bachelors of Science degree from the Wharton School at the University of Pennsylvania. After having been inspired by The Hitchhiker’s Guide to the Galaxy by Douglas Adams, Elon Musk believed that the Internet, renewable energy and space travel would be the ones having the biggest impact on the lives of the people worldwide.

Elon Musk – PayPal, Tesla Motors and everything that followed

After having decided the three major topics of concern for devoting his life’s mission to, Elon Musk, along with his brother Kimbal Musk, started a company named ‘Zip2’.

Elon Musk dropped out of the Applied Physics and material science program at Stanford University just two days after starting this new venture. Zip2 allowed all major print publications to offer additional commercial services to their readers. This IT company was bought by AltaVista, a major search engine then, for cash of $307 and another $34 million in stocks and securities, making it one of the biggest cash acquisitions back then.

After having bought a McLaren F1, a Dassault private jet, and a 1,800 ft condominium, Elon Musk once again set out to revolutionize the payments industry.

Musk began working on X.com, which was later merged with Peter Thiel’s rival company Confinity to form PayPal. After getting his share of $180 Million from a deal that saw PayPal being sold to eBay for $1.5 Billion, Elon Musk had his targets set to space engineering and electric vehicles.

Investing $70 Million of his personal funds into Tesla Motors, a company founded by obsessive Silicon Valley engineers Martin Eberhard and Marc Tappening, Elon Musk began the major shareholder of Tesla Motors. While everything was going fine for Tesla Motors until 2007, with receiving Global Green product design of 2006 and an additional $100 million investment from the Google founders, things turned around completely for Musk and Tesla motors.

Martin Eberhard’s strategic miscalculation affected the transmission for Tesla’s Roadster and also the pricing ended up double than what was initially presumed. Tesla missed the shipping dates by an year and it didn’t go into production until late 2008. Tesla Motors was headed for a downfall and this made obvious to people as to why there hasn’t been a successful automobile company born in the United States, since 112 years, when Ford Motors started operations.

The Resurrection of Tesla and SpaceX 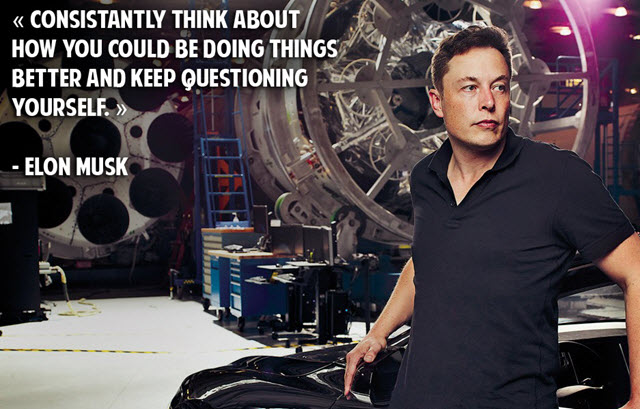 “Failure is an option here. If things are not failing, you are not innovating enough.”

With missed deadlines, price gauging of the product, mismanagement of operations, everything was in a turmoil at Tesla Motors. This was when Elon Musk stepped in and took charge of the operations himself.

Having fired everyone involved in the stalling of the product development, including its co-founder Martin Eberhard, Elon Musk announced himself as the CEO in 2008, investing an additional of $55 million of his own money.

Elon Musk sold his McLaren F1 and invested his last $20 million into the company to save Tesla Motors from bankruptcy. By cutting down staff, reducing suppliers and closing some of the offices, Elon Musk brought Tesla Roadster to the market in 2008, with an increase of $20,000 over the original price.

Read the story of how Tesla motors came to its being and how Elon Musk turned around the shambles at Tesla Motors.

Over 340 of its Roadster models were recalled for technical issue with the rear hubs in 2009. Fast forward to 2010, and Elon Musk was celebrating the public offering of Tesla Motors, which saw an influx of $225 million of investment at $17 as the price of a share.

As of now, Elon Musk owns 30% of Tesla Motors and the company has a total market cap of $27.44 Billion, making Elon Musk of a whopping $13 Billion net worth. Tesla Motor’s Model S became one of the primary reasons for the rapid and unexpected rise of the company from its shambles.

Elon Musk went on to invest $10 million of his 11% share in PayPal on SolarCity, the concept of providing solar-powered systems for individuals, businesses and the government.

SolarCity filed for an IPO in 2010, reached a market cap of $5.53 Billion and Elon Musk owns 25% of the company. While being involved in Tesla Motors, Elon Musk simultaneously pursued his dream of space travelling and colonization of Mars, by founding SpaceX in 2002.

While Tesla Motors was at its all-time low in 2008, such was a similar case with SpaceX, in which Elon Musk had invested $100 million of his own money received from the PayPal deal. While going through a divorce, US economy meltdown, Tesla Motors crisis and three failed SpaceX missions between 2006 and 2008, Elon Musk was at his lowest ebb.

But things turned around when SpaceX’s final and fourth mission of Falcon 1 successfully reached the orbit, making it the first privately funded company to have orbited Earth.

This was when Elon Musk signed a $1.6 billion contract with NASA and another round of a $40 million investment into Tesla Motors on Christmas Eve. You can hear it from the man himself on the near-bankruptcies of Tesla Motors and SpaceX, in his hour-long Google Hangout talk with Sir Richard Branson.

From $1 a day to Billionaire Industrialist 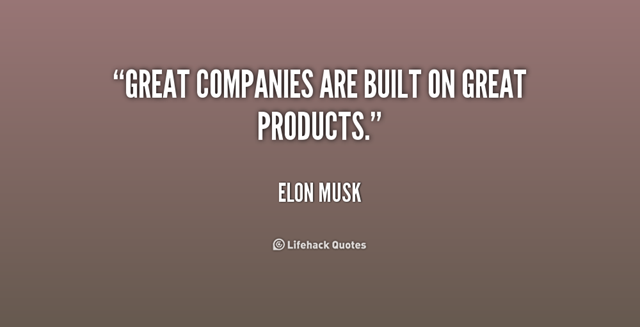 “I would like to die on Mars. Just not on impact.”

While a young 17-year-old Elon Musk was working on his first Internet startup, he decided to test his dedication to the mission by limiting himself to $1 a day for expenditure on food. Here’s what he had to say about that experience on the StarTalk Radio podcast:

““I mean, in America it’s pretty easy to keep yourself alive. So my threshold for existing was pretty low. I figured I could be in some cheap apartment with my computer and be okay, and not starve. So I was like, ‘Oh, okay. If I can live for a dollar a day — at least from a food cost standpoint — it’s pretty easy to earn $30 dollars in a month, so I’ll probably be okay.”

Although Elon Musk was concerned about finding a job once he graduated from college, he decided to test himself to see if he had what it takes to survive the technology industry.

Elon Musk identified early on that is the exact perspective that one needs in order to be successful as an entrepreneur. Until a startup gains traction, it is very demanding on the founders, and Elon Musk decided to take on this path to appreciate the true definition of struggle, hard work and the hunger for success.

“If something’s important enough, you should try. Even if for you – the probable outcome is failure.”

Jim Cantrell, one of the pioneers in the Aerospace industry, along with whom Elon Musk collaborated for developing projects for Space X had to say this about the man:

“What I found from working with Elon is that he starts by defining a goal and he puts a lot of effort into understanding what that goal is and why it is a good and valid goal. Once he has a goal, his next step is to learn as much about the topic at hand as possible from as many sources as possible. He borrowed all of my college texts on rocket propulsion when we first started working together in 2001.

The one major important distinction that sets him apart is his inability to consider failure.”

If you are interested further in learning more about this visionary genius, care to read the book ‘Elon Musk: Tesla, SpaceX and the quest for a fantastic future‘ by Tech writer Ashlee Vance. 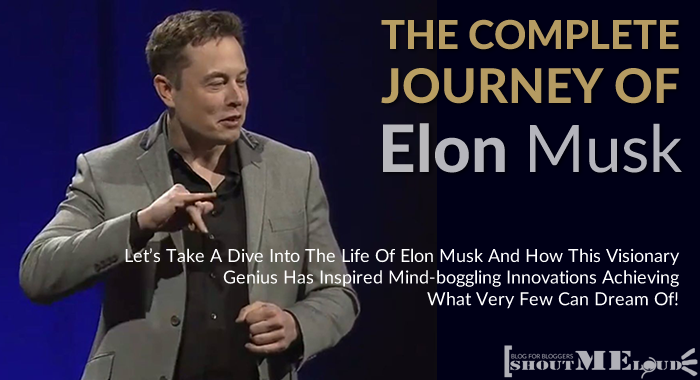