Advertising and marketing are two crucial aspects which define the success of any business in this competitive world. A business needs to get noticed to develop itself as a brand. With the internet evolution at its peak, blogging is emerging as the best platform and great choice for many brands to advertise and market their products for free.

Right from the introduction of print media, companies have smartly utilized the power of advertising to market their products to the farthest corners of the world, creating a trustful brand along the way. It was the dawn of a whole new Advertising industry. Businesses even today, rely on this advertising industry to stand tall among the fierce competition.

Advertising industry often focused on the major mainstream media such as Print, Radio, and TV to promote bands. However, as the internet media experienced massive growth in the past couple of decades, these traditional advertising media have got some fierce competition from the social media on the web with blogging playing a huge role in it.

Lately, irrespective of its success in delivering great results for brands, Blogging is often criticized by trade pundits claiming it to be a mediocre platform having a very short lifeline. Nobody could predict the future, but such claims are pure signs that Blogging is undoubtedly giving some fierce competition to the mainstream media. 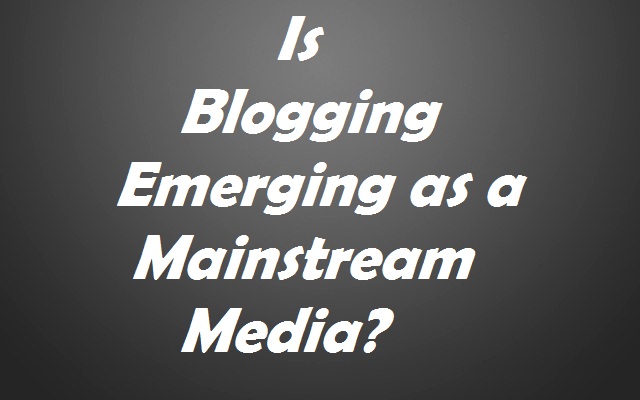 Evolution of Blogging and Its Outreach

Blogging was introduced on the web in the late 90s and was mere a platform or website where the blog owner posted daily, weekly or monthly entries about their day-to-day lives.

Blogging gained its popularity as its usage spread during 1999 after the arrival of first hosted blog tools like Open Diary (1st blogging tool), LiveJournal, Pitas.com followed by DairyLand and Blogger.com (which was later acquired by Google).

Although the blogs during its evolution showed some huge impact over the political circuit, Blogging gained its mainstream popularity when many political consultants, news services, and candidates began using the platform for outreach and opinion forming.

Slowly and steadily, the blogging industry picked up the pace into the mainstream media and became an excellent tool for politicians and political candidates to generate opinions on different matters of the state or the world.

The widespread popularity of blogging was even noticed by U.S. President Barack Obama who acknowledged the emerging outreach of blogging by saying that,

“If the direction of the news is all blogosphere, all opinions, with no serious fact-checking, no serious attempts to put stories in context, then what you will end up getting is people shouting at each other across the void but not a lot of mutual understanding”

The influence of blogging was not restricted within the political arena alone. Blogging being an internet media was the ultimate choice for all internet businesses and eCommerce stores on the web. Eventually, the blogging platform became a hub for many internet-based businesses to market and promote their products; meanwhile, bloggers made good money out of it.

With such a huge impact and influence on society, Blogging has emerged out as a full-fledged career for many individuals all around the world.

Why Is Blogging the No.1 Choice for Promotion Today?

Blogging provides a transparent advertising model. With services like Affiliate Marketing, the merchants or companies are required to pay the bloggers only when they register a sale for them. Unlike other advertising media whether print, radio, or TV where you must pay for the services without any guarantee of a purchase, Blogging seems to be a wiser choice today.

Although only internet based businesses and few tech companies are utilizing the power of Blogging media as of today.

Many individuals in the age-group of 14-40 years are spending most of their time on the internet either for their job, studies or entertainment purposes. With the popularity of Facebook, Twitter, Instagram, and other social media, the outreach of the blogging industry and its influence is rising every single minute.

The young generation is relying upon the internet for the latest news and updates. With the emergence of Smartphones and other smart gadgets, the youth is getting closer and closer to the internet media while moving away from other traditional media. Hence, it is easier to target the youth segment utilizing the blogging media smartly and the most effective manner.

The Journey So Far…

Today, there are many influential blogs such as Mashable.com, TechCrunch.com, TheVerge.com, TheNextWeb.com, and lot others that focus on the technology aspect of the world. All these blogs are best known for their coverage of the rising startup culture globally. It’s a widespread belief that the success of a StartUp is not achieved if the company is not featured in any of these blogs. Also getting your StartUp business featured on one of these blogs can guarantee instant popularity as a top-quality brand.

Lately, in emerging countries like India too, blogs are being noticed by the eCommerce giants such as FlipKart.com and Amazon India which are registering huge sales every day getting high amount of referrals from different blogs all over the country.

One example of such success was experienced by Xiaomi Smartphones, which was exclusively sold on Flipkart. The Chinese Smartphone manufacturer company registered huge sales without any advertisement on print media, TV, or other tradition media channels but solely relying on internet bloggers. Such a huge success has positioned Xiaomi as the third-largest smartphone maker in the world.

This is just one success story. The internet has a huge list of such success stories where the blogging industry has played a crucial defining role for the company’s success.

However, with the StartUp culture boom and growth in the internet population, the blogging industry is giving a tough competition to the traditional media and emerging as a mainstream media for upcoming brands offline as well.

I would love to get an opinion from your experience on blogging emerging as a mainstream media. Do you think that blogging is already there or it’s on it’s way to be the one?

Authored By Rajeesh Nair
Rajeesh Nair is a freelance content writer and a part-time blogger. He is an avid reader and believes in expressing his opinions through writing. At PickDigest, he shares his views on the modern lifestyle trends.